JacoBlog - Jacobs Media's Blog: You Reap What You Sow

You Reap What You Sow 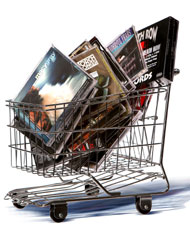 In a recent New York Times article, the headline "The Album, a Commodity in Disfavor" blares at you.  Jeff Leeds documents the death of the album/CD, as the world moves to downloadable singles.  Of course, there are exceptions - bands like Tool, and even last year's Red Hot Chili Peppers audacious double CD, Stadium Arcadium, which sold a whopping 2 millions units.  (By today's standards, that's a lot.)  Classic Rock, Jazz, and other genres have kept the album on life support, but the bottom line is that it's all about singles and ring tones, and not about albums.

You can blame this on technology, and the notion that too many albums contained too many bad songs.  Of course, that's been the case for decades.  But perhaps the other suspect in the album's death has been the record labels, adamant about releasing songs one painful single at a time.  And in the process, virtually forcing radio not to jump to second and third tracks.

Think about a CD like Creed's My Own Prison, first released nearly a decade ago.  As the songs were doled out one single at a time, it may have helped to sustain the album on the charts.  However, in the process, radio stations looked bad when they proclaimed the new song from Creed, "What's This Life For," months after millions of fans bought the CD.  Yes, this is stupid on radio's part - not being in touch with the audience.  But how many radio stations would have been more than happy to expose multiple tracks on a hit CD, only to be told that doesn't fit the marketing strategy?

Today, it's not always easy to even get the so-called "full length" CD from labels.  They're happier to just send out the single.  And in the process, the entire project becomes minimized, smaller, and easier to ignore.  Hey, if the single doesn't sound right, you just move on.  Maybe that's what the Chili Peppers were thinking when they imagined Stadium.

In the meantime, the days of Tommy, Sgt. Pepper's, or even Don't Look Back are in the past.  And now it's either downloading singles for a buck, simply stealing them, or hoping for a cool ring tone.

At the end of the day, when you just market singles, you communicate to music lovers that's all they should buy.  That's why Apple's recently announced plan is so interesting.

Their new come-on is a clever way to capitalize on consumers finding that song or two they like - a financial incentive to own the whole album.  Of course, the iTunes model has been powerfully rowing in the opposite direction, so it will be fascinating to see if this "180" can gain any traction.

There aren't a whole lot of Tommy or Dark Side efforts these days.  But who knows?  Maybe you download an Amy Winehouse song you like or want the new Rush single, and now you have a little nudge toward the entire album.

It sure can't hurt.

A nudge toward buying an album can't hurt...but the nudge really isn't hard enough these days. It is partly radio's fault. We gave up playing multiple tracks at the same time about 30 years ago. And most of the recent bands haven't created something of that magnitude. The question is, if "Dark Side," "Sgt. Pepper's," or any of those albums in millions of people's collection were released today, would they become a legend or just one song someone heard on the radio or downloaded?

Appreciate the link to my "end of the album" posting - thanks!

It's as though everything has come full circle ... from the days of 45s, through decades rich with gems such as "Pet Sounds" and "Tapestry" and "Nevermind," and now we're back to a single-minded (no pun intended) society. It will be interesting to see how the changing tide shifts in the coming years.

What several decades ago was taken for granted...
namely, the fully-realized and synergistic song
cycle we hear on "Dark Side" and "Aqualung", only
sporadically occurs today. But when it does, swimming
directly against the strong current of super-short
teenage consumers and record industry attention spans,
it still inspires awe. The last time I got socked in
the solar plexus by an entire album...a totality of
rare beauty...was when I first heard Springsteen's
"The Rising" album. The only word is W-O-W.