HD or not HD

That IS the question.

As technology grows and morphs at breakneck speed, our Tech Poll questionnaires have had to cover more ground.  This year, we spent a considerable amount of time on the subject of HD Radio.

Why?  Because so many of you are investing a great deal of money and time on technical improvements, not to mention all that advertising time you're running to promote this new technology.

But is it working?  Are the Alliance's promos featuring the best messaging?  What is that consumers want to know about HD Radio?  What tactics can most effectively sell these units to radio listeners?

Our data shows a classic good news/bad news scenario.  On the smiley face front, awareness of, and knowledge about HD Radio have markedly improved from year to year. 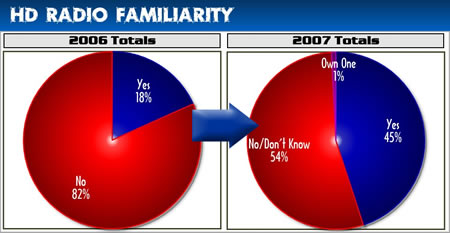 But there's a dark side.  Only 1% of our Rock Radio sample owns an HD Radio, and there doesn't appear to be great desire to buy one among the rest of our respondents.  What's the problem?  There is still considerable confusion about HD Radio, and most people simply haven't heard it nor do they know anyone who owns one.

This is a serious problem with any new technology.  Did you want to buy an iPod before holding one in your palm, or talking to your enthusiastic friends who already bought one?  Did you have any desire to purchase a TiVo until the guy at work told you how it changed the way he watches TV?  And did you really get the plasma/HDTV bug until you walked into Best Buy and saw Brett Favre like you've never seen him before?

That's a big issue affecting HD Radio's future, in addition to other challenges down the road.  Our study provides rich data about what the radio industry can and should do to face the future.  We hope you'll find it worth the read.

This exactly, what Mark Ramsey has been saying:

“While interest in satellite radio is diminishing, interest in HD shows no signs of a pulse.”

"In other words, Bridge says interest in HD radio is decreasing even as your station works hard to increase awareness. What can I possibly add to this honest and bleak picture that I haven't said before? My well-intended warnings about HD's "premature death" seem to be rearing their ugly heads almost two years later."

"But is 'availability' of HD radios the problem?"

"And one broadcaster reported to me that he asked an iBiquity rep how many HD radios had actually been sold as of the most recent accounting. And this was his answer: 150,000."

And, of course, there are some who think HD Radio is a farce:

“HD Radio on the Offense”

“But after an investigation of HD Radio units, the stations playing HD, and the company that owns the technology; and some interviews with the wonks in DC, it looks like HD Radio is a high-level corporate scam, a huge carny shill.”

And, of course, HD/IBOC supports want us to think that HD Radio is a done-deal:

Well, one thing I know is "Greg" posts that same BS everywhere he goes.

Just get more radios in more people's cars and let word of mouth take care of the rest. I bought one and I think it's really neat, especially the multi-cast channels. Once people realize they can get more stations without a subscription, they'll want one too... especially once prices drop.

Nelson is your typical HD/IBOC supporter, who resorts to personal attacks, when we all know darn well that HD Radio is DOA.

Peter Ferrara, President CEO of the HD Radio Alliance weighs in on
our Tech Poll findings about HD Radio. Peter's comments are in
italics and surrounded by brackets. Of course, we welcome your opinions on HD Radio, as well as other topics covered here in our blog.

While there are some positive aspects to this data, especially where it concerns overall awareness and a better grasp of the technology, confusion about HD Radio remains. An overall lack of knowledge continues to be a major barrier in taking the plunge and purchasing an HD Radio, [among those surveyed in the rock genre formats.]

A key issue involves exposure to HD Radio. Many people either haven’t heard it or don’t know anyone who owns one. Given the importance of trial and the value of word-of-mouth advertising, HD Radio is not benefiting from peer recommendations. Additionally, because most people haven’t ever heard and experienced HD Radio, they simply don’t feel they have enough data or experience to strongly consider a purchase.
[Just the same, we understand that HD Radio is following the same trend of every new technology during early adoption. The MP3 player was around for over 5 years before the Apple iPod broke through and became widely distributed and used. Given that 18 months ago, there were only two aftermarket HD Radio’s even available, no retail distribution and very few radio stations even broadcasting in digital, it amazing to realize that HD Radio today boasts over 50 different SKU’s, thousands of retail outlets including the largest like Best Buy, Radio Shack, Circuit City and Wal-Mart, and there are over 1900 different HD radio stations on the air in over 188 markets.]

The HD Radio asset hierarchy points to some significant findings for the HD Alliance, iBiquity, and terrestrial broadcasters. Among
this Rock-based audience, the lack of subscription fees is the standout advantage, while additional stations and variety are far down the list. This suggests that future HD Radio advertising and marketing might focus on strategic benefits, some of which can be effectively segmented to different target consumers. Men, for example, are more interested in the digital quality, while women are more apt to be attracted to the lack of subscription fees.
[This of course is not new information to the Alliance since they conducted a much larger and demographically balanced consumer research study last Spring where each of the core targets were identified and a specific message matrix was created. In each, the “no subscription fee” benefit stood clearly at the top. Since that time, all of the Alliance based marketing has highlighted this value in addition to “new content” and “better quality”.]
Other barriers are not insignificant either. Aside from the intense competition from iPod-like devices (more and more available in vehicles), and satellite radio’s significant lead, HD Radio also has to contend with concerns about its long-term future, the need for receivers in multiple locations, and their expense.
[It is worth noting that prices for HD Radio has dropped
precipitously the past 18 months from the $600-$800 range at the end of 2005, to the $60-$250 range today.]

Jacobs Media’s Technology Web Poll III is the largest study of its kind [(except for the Alliance national consumer marketing study conducted in May 2006 which was 27,000 respondents, age and sex balanced and properly weighted to reflect a national profile)], conducted in late February/early March 2007, among more than 25,000 respondents across 69 different Rock-formatted stations. It is the third annual Technology Poll, conducted among Rock radio listeners who are predominantly members of station email clubs. Participating stations represent Mainstream/Active Rock, Classic Rock, Alternative, and Triple A outlets in markets around the U.S.
Of course, this is a web poll, and cannot replicate all radiolisteners or even all Rock radio listeners. As with all Internet-based research projects of this kind, the results reflect only those who chose to participate in the survey, and do not necessarily represent the views of all Rock radio listeners in the country. Still, the 69 radio stations that invited their listeners to take the survey are a broad cross-section of Rock stations, from large and small markets, as well as those that play the newest Rock
music and those that play only Classic Rock.
[Of course, we only point that out as a disclaimer since we know the reliability of this data is very suspect and it’s hard to draw any real conclusions from a study of this nature.]

It is my job to keep up databases of all of the radio stations in the US and Canada. When I call stations that supposedly have HD-2 and even HD-3 signals up, and I ask the person I'm speaking with, usually the receptionist, about them, I usually find that they don't even know what HD radio is, let alone being able to confirm that there is a secondary or tertiary station on the air.

But then, even the HD Radio Alliance doesn't seem to be able to explain what HD radio really is; I've heard their commercials with phrases like "a radio station between the stations."

Let's face it; HD radio is the best thing to happen to FM radio since, well, FM radio! You would think that they would do a better job of promoting it. I know I could!

Everytime something new comes along, it is as if the industry wants to forget the past (history) of the adoption of new technology.

1.) Do you remember how NBC finally "sold" color tv to Americans? The NBC peacock logo and the line "the following program
is being brought to you in living color on NBC!"

And still it took a much lower product price point and 10 Years BEFORE ABC/NBC and CBS could justify 100% of even prime time
to be produced and broadcast in color, as I recall!

2.) And what is always totally forgotten is how much money the consumer still has to spend on all the hardware!

HD Radio is a total farce !