A few months ago, we put out an advisory about "Guitar Hero," Activision's cool video game that lets the player jam to great Rock songs.  (It's the game that supposedly injured fireballer Detroit Tigers pitcher, Joel Zumaya's arm during last season's Playoff/Series run.)  As video games make a great comeback this year, "Guitar Hero" has led the way.  It's "2" version continues to move the sales needle.

A few thoughts about this cool game.  First, it reinforces Rock - and very likely spikes interest in a genre of music that has been suffering in the ratings.  Using on-air language that supports "Guitar Hero" play can help connect a highly successful game to the music that Rockers and Classic Rockers feature as their main diet.

Second, it's a great activity for station events, many of which have become stale and boring.  Too many remotes, client appearances, and other perfunctory "value added" activities have conspired to make radio seem mundane.  Bringing out "Guitar Hero" to station events and energizing the audience is a great way to inject some much-needed life into listener interactivity.  The game also lends itself to tournaments as well.

Finally, it reinforces the high level of gaming that is already taking place among the Rock audience.  Our Tech Poll III shows that nearly half of Rockers play video games weekly or more.  And this isn't just a young activity - four of ten Classic Rock fans are weekly players, too. 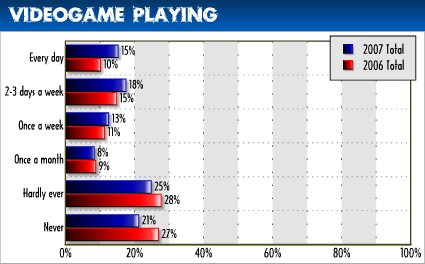 It's about lifestyle - and in the case of "Guitar Hero," it's a great way for listeners of all ages to truly participate in playing along with a Rock station's core music.  In a musical era where it's hard to remember the last great guitar lead, it's heartening to know that consumers still want to wail away at the axe.  Rock on.

Have you seen the Guitar World concept where you can learn how to play every note from Hendrix's "Axis: Bold As Love Album?" Have you seen Pete Townshends new online song creation program "The Method?" These are amazing.

The only thing that injured Joel Zumaya's arm was Joel Zumaya's pitching mechanics. He is destined for a Kerry Wood future of a short period of great achievement followed by a lifetime of disability.

I'm curious if he'll blame the Wii for his upcoming visit to the 60-day DL.