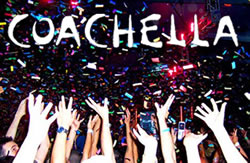 3 days of music on 5 stages... 125 miles east of Los Angeles in the middle of the desert... 60,000 people per day... And Jacobs Media's Dave Beasing was one of them. Typical of Dave, he offers up some big picture thoughts on a memorable weekend.

Rock & Hip-Hop can co-exist.  For many of the attendees, the musical boundaries that radio stations observe are arbitrary at best.  Good music is good music.

May you live in interesting times.  The first flyer thrust in my face wasn't selling a band, but headlined, "Impeach George Bush for war crimes!"   Not surprising at a festival headlined by a reunited Rage Against the Machine, political rage was definitely in evidence at Coachella. 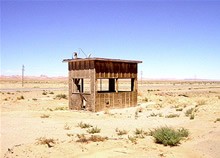 Theater of the mind still works. For their third year, FM 94/9 in San Diego rented a house near the venue where bands could stop by for a cold Heineken (sponsor mention), take a swim, chat with each other -- and play a live acoustic set on the radio.  As this absurd photo from the station's website shows, the reality at the house was a little less colorful than the impression created on the radio.  FM 94/9's Coachella House has become part of festival folklore.

The kids are alright.  I witnessed not one drunken fight, not one incident requiring security to escort someone out. Oddly enough, the oppressive desert heat may have been partly to thank for this civility, but -- if this is any indication -- Gen-Y just wants to get along.

"People talk about people."  Past Jacobs Summit speaker Emmanuel Rosen made that point so well.  And celebrities are people that get talked about most.  Even in jaded Southern California, much of the crowd comments were of the "Look, there's Drew Barrymore!" variety.  If you produce your own festivals and events, don't forget to invite the local celebs and treat them well.  You'll generate word-of-mouth as the place to be.

DJs play live music, too.  At one of the most popular tents, two guys "playing" vinyl caused as much crowd excitement as anyone playing guitars ever could.

Cell phones are the new cigarette lighters.  Everywhere you looked at Coachella, citizen journalists were capturing their own moments to remember - or sharing them instantly with friends who were elsewhere.

Sanitation services can be "crowdsourced."  How do you keep the trash from piling up?  Pay the crowd to pick it up and call it "recycling."  10 water bottles = 1 free refill.

R.H.C.P. stands for Radio Hits Chili Peppers. Say what you will about the "indie" vibe at Coachella -- as relative newcomers like Arcade Fire and Kings of Leon provided memorable sets -- but Saturday's peak was during the Red Hot Chili Peppers (see video below).  Despite Alternative radio's ratings doldrums, everyone at Coachella was able to join in the sing-along for one reason -- airplay.

You can click here for more music from Coachella.