« Your Strength Is Your Weakness | Main | iPhone - Postscript »

Jacobs Media consultant Ralph Cipolla boldly inserts himself into the debate about the iPhone's impending success - or lack thereof.

Anyone who consults, markets, or consults marketers has read, re-read, and can recite by rote all of Ries & Trout’s “22 Immutable Laws of Marketing.”  In 1994, Al Ries formed “Ries & Ries” with his daughter, former New York City Advertising Agency Account Executive, Laura.  Laura’s blogs are engaging and insightful, often in a contrarian manner.  For the last three months, she has offered a series of iPhone missives, predicting the “iPhone Is likely to be the biggest flop of the 21st century.”

Laura’s key point is that the iPhone is a convergence product because it ties together “multiple functions into one device...

Convergence means compromise.  Convergence products capture the imagination of the media and public but the devices can never deliver on their promise of nirvana because all convergence devices are doomed by compromise.”
-- What is driving the iPhone hype? June 19, 2007

OK, Laura, but let’s consider a set of essential business tools.  Many were once expensive, large, inconvenient to operate and transport, and others were just too numerous to manage, making travel difficult, and all but eliminating the prospect of taking the office on the road or even home at night.  All were ultimately combined into one “convergence device” - the laptop.  It combines the now extinct word processor with devices that can create and present spreadsheets and slide-shows (remember the overhead projector?)  It combines the ability to compose, send and receive email, and allows one to browse, download, and save content from the Internet.

Laura is also concerned that no one has actually been able to sample the iPhone, making it an untested product.  And to that I say, “brilliant.”  It has only served to compound rampant curiosity, all but ensuring millions of hits to the iPhone site and long lines in front of your local Apple and/or AT&T store.

A final word on the need for the convergence of art and science.  Too often, consultants and marketers dive head-first into data, theory, and philosophy, ignoring the “art” or “gut” one needs when assessing consumer needs and behavior.  In a word, the iPhone is freakin’ cool.  I agree with the fundamentals of Laura Ries’ convergence vs. divergence argument, but her point is off the mark with respect to the iPhone.  The multi-use-Swiss Army Knife/SmartPhone is a successful part of our gadget-craving culture desires? 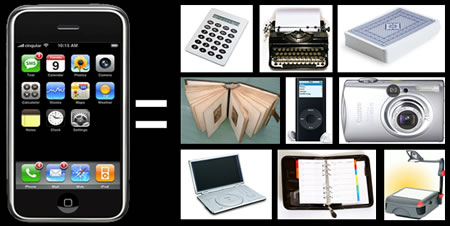 And in the final analysis, the success of the iPhone will probably rest on the notion of branding – something that Laura Ries should know a great deal about.  It’s not always about the very best product – it’s usually about the best branded product.  If you ask a motorcycle expert about the best-made, best-designed bikes, he’ll probably tell you that the Harley-Davidson is nowhere near the top.  However, the Harley is the brand for guys like us to buy.  It’s not the performance of the bike or its torque or brakes – it’s about what that brand says about us.

That’s been the case for iPods.  They are fraught with problems – poor battery life, iTunes issues, clunky performance.  Yet, they’re the mp3 player that everyone wants.  They look great, they feel great, and they say a lot about the owner.  They may not be the very best or most economical players on the market, but they are the brand that everyone wants.

So why would you bet against Steve Jobs at this point in the game?  If anyone understands how technology’s form and function converges, it’s Apple.  The iPhone answers all the needs that we continue to see in our own research – a sleek, small, elegant, and cool device that combines many different functions into one great-looking package.

So, Ralph, when was the last time you used a Swiss Amry Knife?

So Greg, when was the last time you saw a swiss army knife promoted in every prime time TV break for the last two weeks.....?

If the early adapters love this (and early indictations are that they do) this will be the IT/must have device for the next 18-24 months, minimum!

Regarding branding principles, I would normally agree with the Ries's, but I think Laura is way off base, and is misapplying convergence theory to her own detriment. She seems almost petty and vindictive in her multiple assaults on the iPhone, and to have made up her mind months ago based on a false assessment of what the iPhone is.

For starters, it isn't a convergence product. But, then I don't agree that the laptop is one either. I understand you were using that to make a point (as I did in my own blog too), but if you think a laptop is a convergence product, then what about a TV (combination of radio + pictures), or a car (obvious), etc. Or maybe she thinks these are also examples of utter market failures.

I think Laura or her dad must have read something about convergence theory, or had an MBA course where they talked about it. But, they don't really deeply understand how it works and what it means. But, like a terrier, she has the iPhone in her teeth, and she won't let go.

Not that she's totally to blame. Steve Jobs has executed a brilliant long term product and positioning strategy, and has used the iPhone tag to project that the product is a phone, even though it isn't that either. But in the short term, it serves his purpose because there is a huge gap in that market space for a stylish, easy to use, highly integrated, intuitive phone -- and, it's something that everyone who can afford to buy one will understand. But make no mistake, this product fits a different category, and in that category it stands out as absolutely unique and a breakthrough product that will disrupt several markets on its way to a stunning success.

But by misguiding the pundits and analysts with the false idea that this is a phone and a convergence product, he's deflecting attention from what he's really doing, while still generating tons of positive publicity -- perhaps the most buzz for any product in history.

My analysis of what Steve is up to is here: http://thewaythingsare.typepad.com/antimarketer/2007/06/what-is-steve-j.html , as well as a full deconstruction of what Laura, Al and other analysts are missing and why.

Laura's going to be erasing her post on of these days (and I mean days, not weeks) and hoping that Google will forget to archive her error.

There's a difference between a "convergence product" and a new category. Laura has read all her dad's books and should know that.

Laura's going to be erasing her post one of these days (and I mean days, not weeks) and hoping that Google will forget to archive her error.

There's a difference between a "convergence product" and a new category. Laura has read all her dad's books and should know that.