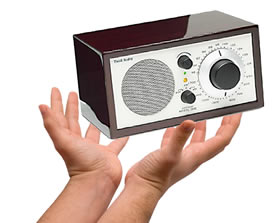 In more and more conference rooms, we're hearing increasing evidence of business moving to digital platforms.  As radio copes with flat to down revenues in many markets, the rush to generate revenue via websites, texting, and other new applications becomes an ever-increasing reality.

It's tough out there, as companies grapple with choosing the right strategies to pursue, given all the choices.  Is it podcasting, streaming, blogs, HD Radio, or even different commercial architectures, along the line of models that Clear Channel is pursuing?

Within all of this, the listener's role becomes even more important.  She has more power than ever before - to shape a station's web strategy.  There's clearly a tendency to over-program station websites, as opposed to giving listeners more control over content.  The very act of submitting playlists for a "Perfect 10" feature, for example, is a different form of "research" that most stations have not experienced.

Part of the web reality is letting go - loosening up the reins of control, and letting the listener have a growing say in what is programmed.  After all, they're doing this now with iPods and TiVos, so this notion of control and choice becomes even more important.

The manager of John Edwards' online communications for his presidential campaign, Matthew Gross, speaks to this same issue.  In the political media arena, it has traditionally been all about control - a campaign's spin tactics, the rapid response strategy, staying "on message," and making sure the environment (right down to the backdrop) is all staged out properly.

Not so today.  While YouTube, for example, may be an efficient way to post a great speech or even a campaign commercial, it can also be problematic.  A case in point for the Edwards' campaign is that now-(in)famous video of the candidate primping for a television appearance, set to the tune of "I Feel Pretty."  Or it's what Hillary Clinton endured when someone from the Obama camp posted that Apple parody spot, depicting Hillary as "Big Mother."

As Gross points out, "Traditionally, when one politician attacks another, you respond either by attacking back or voicing your outrage that a candidate would stoop to such a level.  Now, suddenly, the audience is able to hurl their attacks as well.  Asymmetrical warfare is the perfect analogy, because now the ability for things to go viral is in anybody's hands, and if an attack is coming from a voter, it's no longer a given to simply strike back."

Growth in the digital arena may be all about ceding some control.   Allowing your listeners to build their own communities on your website is a great goal, and one that stations can accomplish.  But in the process, broadcasters are going to have to take some risks and do some letting go.