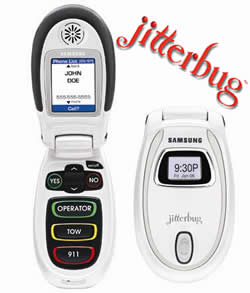 Samsung has a new mobile phone about to come to market - the Jitterbug.  According to cell phone maven, Arlene Harris, this new offering has been simplified (dumbed down) to appeal to Baby Boomers.

It only has three buttons - one that calls 911, another to call an operator, and a third that has a number that obviously a tech expert would have to program.  To make Boomers more comfortable, there's even a dial tone!  Of course, the phone has no icons, because that would only confuse these consumers.

What in the name of Steve Jobs is Samsung thinking?  The target of the Jitterbug (the name itself says it all) isn't Boomers - it's their parents!  And I'd venture to say that even consumers in their seventies can manage a basic cell phone.

Do today's mobile phones contain useless features that many people never bother to use?  Of course, they do.  But perhaps Harris and Samsung ought to tackle remote controls, many of which contain buttons and applications that even teens can't figure out.

As for the Jitterbug phone for Boomers - well, AARP me!

I actually bought a cell phone for my mother, who I guess would be considered in the Boomer category. She has the Dial version of the phone that is like a regular cell phone with a full keypad. She is more than capable of a more advanced phone, but preferred the Jitterbug for hearing and sight purposes. I tried the phone and you can hear 100 % clearer than on my own cell phone.