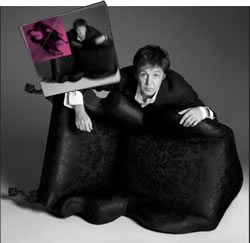 Today's the day that every Starbucks on Planet Earth will be playing wall-to-wall Memory Almost Full, the new CD by Paul McCartney.

At Jacobs Media, we have long referred to seminal Classic Rockers as "Mt. Rushmore Artists" - the faces that every core Rock fan envisions as synonymous with this great music.  For most people, Paul McCartney is on that list.  While the Lennon die-hards may argue that point, McCartney's legacy is in stone.  Which is why it's remarkable that he continues to sweat every new CD as if it were his first.  (In fact, he probably is sweating his new CD, Memory Almost Full, more than he did those early Beatles releases.)

In a recent New York Times article, Paul talked about how even at age 64 (he turns 65 - the so-called "retirement age" on 6/18), he has his "fingers crossed" that the new CD will be well-received.  Here's the quote that caught my eye:

"I've worked quite a lot in the past with Richard Rodney Bennett, who's a great composer and orchestrator, and he once said to me that his greatest fear is 'being found out.'  So many artists I know have that essential lack of confidence.  Perhaps it's what drives them.  So for me it's always a pleasant surprise when it works."

We all know a lot of people in our business that feel the same way. Incredible that a guy who was a driving force of the most important Rock band of all time, who wrote "Yesterday," and hundreds of other hits, can still feel the least bit insecure about his work.

And then Paul also talked about the steps that led up to him walking away from EMI after all those years, and hooking up with Starbucks to release and distribute the new CD:

"Am I feeling like I left the family home?  I have left the family home, but it doesn't feel bad.  I hate to tell you - the people at EMI sort of understood.  The major record labels are having major problems.  They're a little puzzled as to what's happening.  And I sympathize with them.  But as (record producer) David Kahne said to me about a year ago, the major labels these days are like the dinosaurs sitting around discussing the asteroid."

Don't get me going.