Today marks the debut of our new website design at Jacobsmedia.com.

OK, it's not like the release of a CD or the opening of a Broadway play.  But like anything that's new, different, and untested, the folks here at Jacobs Media are a little atwitter about the unveiling of our new website design. 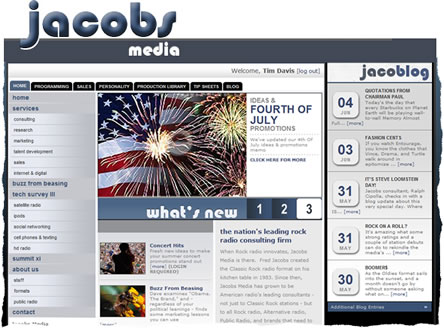 As a radio consultancy, I believe we were ahead of the game when our first website was launched.  (Does anybody remember the flash open with the futuristic spheres rolling out?)  We have experienced great pleasure over the years as our site has become the hub of our company.  It was especially useful in the days and weeks after 9/11 as it became a resource for countless clients, many of whom were scrambling to figure out how to do Rock Radio in the eye of a global tragedy.

In more recent years, our blog (now more than two years old - and getting its own facelift shortly), and other resources were added.  But along the way, the old design simply outgrew its original usefulness.  And like every other entity, it was time for a major redo.

I have long been critical of radio station and morning show debuts in our business.  It has always frustrated me that the TV, print, and theater businesses consistently showcase new efforts professionally.  They may not be all hits, of course, but at least they look, read, and feel like they're ready for prime time.  But in radio, stations launch haphazardly, often jockless, lacking production, and that finished look and sound.  As I've often opined, if new radio stations were like Broadway plays, many would close after opening night.

So, please check out www.jacobsmedia.com, and let us know how it looks, feels, and navigates.  We're big boys, and can take the feedback.  For clients, much of the material is password protected, as you'd expect.  But for those of you who visit the home page (who don't send us a monthly check), you ought to get a pretty good feel for what we're going for.  Digital specialist, Tim Davis, did the major work on the site, as has been the case since he joined us more than a decade ago.

Congrats, bravo, cheers on your new look/feel. All the best, Dave