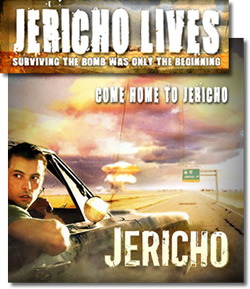 An amazing story played out recently on CBS-TV and the network has done something virtually unprecedented - it brought back a show it cancelled.

In this case, it's "Jericho."  Apparently, one of the problems with the show's ratings came from too many viewers watching it on TiVos and DVRs - and not in real time on a CBS affiliate.  That led to its axing, but thousands of viewers protested the move, and the network relented. And to make their protests tangible, 25 tons of nuts were sent to the network in response to a lead character on the show uttering "Nuts!" in the final episode.

“We want them to watch on Wednesday at 8 o’clock and we need them to recruit new viewers who are going to watch the broadcast.”

Simple, direct, transparent.  If viewers want this show to survive, here's what the network needs them to do.  In some ways, it's a lot like how public radio stations approach their funding plight.  Tell your viewers the full story, let them know what's expected of them, and hope for the best.

On a related note, we received an email from KWOD a while back.  They were forced to cancel a music festival due to poor ticket sales.  There were all sorts of ways to spin this, but station management tried something unique in radio:  they simply told the truth in an email to their entire database.

Of course, many listeners are disappointed, especially those who already bought a ticket.  But to the station's credit, it's a very honest, Neo-esque way to play it, something that will more than likely be well-accepted by their audience.  And of course, the same holds true for all those young "Jericho" fans.  The ball is now in their court.