The video revolution is underway, led in large part by YouTube.  While most people focus on its sale to Google for $1.65 billion, consider this:  YouTube didn't even exist until February 2005.  This reinforces the amazing potential of web-based business concepts, as well as the meteoric rise of streaming video.

This year's version of the Jacobs Media Tech Poll reinforces the video phenomenon among Rock Radio listeners.  (Consider that we didn't even ask about video streaming until this year's poll.)

The data shows the rising tide for video streaming, as over half our respondents download/stream video on a frequent or occasional basis.  Of them, nearly three-fourths visit YouTube. 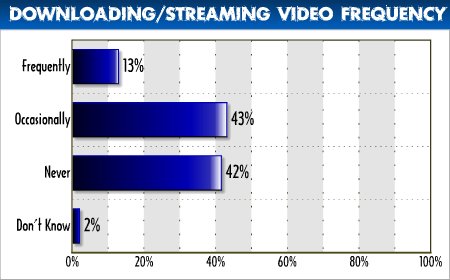 Of course, this has implications for radio, a world in which pictures have traditionally not existed.  But today, listeners expect to see video.  Video is everywhere, from flat-screen TVs to phones to iPods to elevators.

Radio's ability to turn that corner and provide cool video of a morning show stunt, the "Rock Girl" competition, the backstage scene from concerts, or as a way to recap a great event are all new applications that can breathe life into terrestrial radio, its personalities and its communities.  But most stations don't have a webcam, can't post simple video to their websites, and often lack a person in the building with rudimentary editing skills.  (After watching my 15 year-old son and his friend edit a 5-minute video on iMovie the other night, it dawned on me that these are not skills that require a high level of tech knowledge.)

Video isn't a threat to radio - it's an opportunity.

One of the stories you link to (about Youtube stats) has moved, here's the new location: