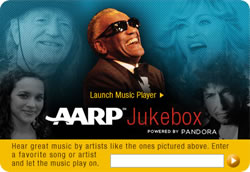 OK, I'll admit it.  I'm clearly of AARP age, but have thus far refused to join this group.  Call it a vanity thing, but the discounts aren't worth the trouble for me, and this is clearly an organization I do not wish to be a part of.  (Of course, an estimated 37 million members disagree with me.)

Not surprisingly, music and concert promotion are now becoming AARP activities, based on their notion that 45+ Americans are being under-served by radio.  AARP's Senior Producer of Digital Media (yes - they have one of these!), Steve Mencher, notes that "we're constantly barraged by talk of the prime demographic of 18-to-34-year-olds, and it's like nobody else matters."  Besides promoting Tony Bennett, AARP also has put its resources behind Rod Stewart and Earth, Wind & Fire tours.  They are also producing radio features now, geared to the notion that their membership is being ignored by commercial broadcasters.

Ironic, isn't it?  As we know only too well, radio is hardly about 18-34s.  But given what the industry did to the Oldies format, radio has all but walked away from fiftysomethings.  I'm not a big believer that the return of WCBS-FM is a harbinger of things to come, or even a revival of the Oldies format.  And it's concerning that the same fate awaits Classic Rock in a few years.

There was nothing wrong with Oldies.  There is nothing wrong with Classic Rock.  Instead of investing more money on music testing to "young up" these formats, perhaps there needs to be more effort in learning how to market different demographics to the advertising industry.

Otherwise, AARP, Starbucks, and all the other entities that embrace aging Boomers will reap the benefits - just as MTV, Teen People, and Cosmo Girl! have gleaned those teen dollars.  It's a sales problem, not a programming problem.