JacoBlog - Jacobs Media's Blog: Do Something! 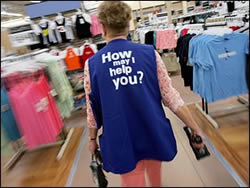 Sometimes when the numbers aren't heading in the right direction, stations (and companies) get that directive to shake things up.  There are times when a little "interior decoration" - that is, changing the voice guy, sprucing up the van - can be a simple way to re-energize the brand.

But there are also times when these moves can go over the top, and rock the worlds of a radio station's most loyal listeners.  I've been involved in a number of logo updates that often feel like that.  There are certain "looks" you just don't mess with because they mean so much to listeners.  They may seem a bit passé or even very dated, but to the audience, they are very comforting and meaningful.  You can get a better feel for the seismic potential of such changes by fielding a few L.A.B. groups, which is one of their best applications.

But sometimes, changes are made for change sake.  That's what Wal-Mart is up to as they're retiring those familiar blue vests that read "How May I Help You?"  Jive, unstylish or not, getting reliable help from a sales form at big box retailers is often perilous.  In fact, even finding a salesperson is part of what sunk Kmart.  But in Wal-Mart's case, those ubiquitous blue vests were part of the familiar site you'd see when you walked into one of their stores.  They're like the Golden Arches at McDonald's or the Nike swoosh.

Wal-Mart insists that moving to a more "preppy" look will be good for customers (who they'd like to see buy more high-end stuff) as well as for their employees (many of whom, not surprisingly, are tired of those vests).  But at what point do you change an iconic look and end up messing with the success of the entire operation?

Of course, we'll see whether Wal-Mart ends up bringing those blue vests back, in much the same way that other consumer goods have had to give in, and go back to what got them to the dance in the first place.

"How May I Help You?" is a unique part of the Wal-Mart brand that may be lost in a sea of khakis and golf shirts.  And with them, possibly part of what makes that company special.