As if the music industry couldn't get even more absurd, the musicFIRST coalition has trotted out a ridiculous "study" from a University of Texas (at Dallas) professor, Stan Liebowitz.  Mark Ramsey, Larry Rosin, and the NAB have already pilloried this bizarre piece of supposed (non-primary) research that claims that radio airplay actually hurts record sales.  It is hard to believe they are actually trumpeting this study as a way to generate support for extracting higher royalty fees from radio.  Talk about biting the hand that has fed them all these years.

Liebowitz claims - among other things - that because consumers listen to radio for approximately three hours a day, and only listen to recorded music for 45 minutes a day, this is time that the recording industry will never get back.

Here's a clip from Liebowitz's conclusions that shows how lame this "study" really is: 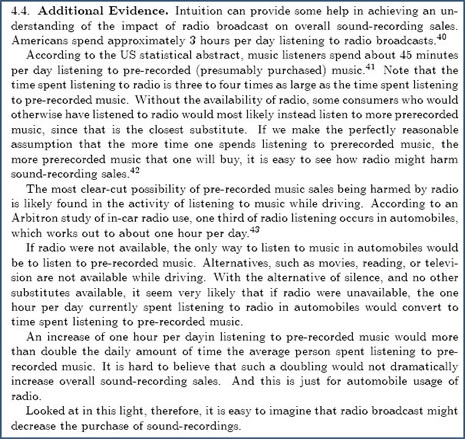 Not only is this ridiculous, but it doesn't account for the ways in which consumers find out about and are exposed to music in the first place.  Nor does it address the myriad ways in which radio has been primarily responsible for building artist and performer brands, supporting concerts, conducting artist interviews, and being the biggest flag wavers in the media world for musicians.  If you looked at the amount of advertising dollars, for example, that the recording industry historically has invested into (*insert band name here*) versus the billions of gross impressions supplied by thousands of radio stations across the country, there's no contest.

Radio has been the de facto marketing machine for the recording industry - period, paragraph.  And every professional with half a brain in the label world knows and respects the power of radio exposure and support.

It is distressing to see this appalling lack of logic unfold because it speaks to the overall lack of strategy and sense that has eluded the recording industry for years now.  Whether it's chasing after 14 year-old illegal downloaders, or pleading with stations to stop playing additional album tracks, the recording industry has done just about everything except best serve its artists and performers.

And it suggests that radio formats that have been historically dependent on new music would do well to look well outside the bounds of major labels for material.  If this is the recording industry's idea of a cogent strategy and smart tactics, you really have to wonder how much longer these folks are going to be around.  The last group they should be messing with is radio broadcasters.