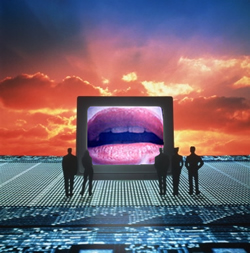 We've received quite a few reactions/responses to the latest findings from Tech Poll III, indicating the power of television among radio audiences.  I've heard everything from "How could you guys put out an anti-radio piece?" to "This is news?"

But it is news - and it isn't necessarily a negative.  It emphasizes the importance of compelling content, whether you're producing a morning show, a sitcom, or a website.  And given all the "new media" noise, it's significant that TV continues to play such a major role in people's lives.

That may not have been the case a few years ago.  If you recall, "Seinfeld" was winding down, the "Sopranos" and "Sex & The City" were all the rage on HBO, and the big networks were adrift.  But consider some of the buzzworthy shows from the past few years that have ignited ratings and revenues, while motivating social behavioral change.  From "Desperate Housewives" and "Grey's" on the one hand, to "Idol" and "Dancing With The Stars" on the other, and to "24" and "Lost," there's truly something for everybody on network television.  Yes, they're obsessed with 18-49 year-olds, but their offerings truly cover the gamut. And they get people talking.  Americans plan their weeks around what's on TV.  They get together to watch shows, they blog about them before and afterwards, they talk about them at work and school.

Think about the "flap" following the final episode of "The Sopranos."  Now granted, this is a special show, but did Howard Stern's final show on WXRK generate this kind of talk and controversy?  David Chase went out with a bang.  A huge, buzz-generating show gave the country even more to talk about as it ended its run.

In radio, we have not been as successful during this time, and it shows in our survey.  Radio is still essential, but we are rapidly becoming a medium that is easier for the audience to take for granted.  You can see this phenomenon in the 18-34 responses to our question.  Not only is FM Radio even less important to them (only one in ten picks it as most essential), but cell phones and the Internet are the big winners, eclipsing television.

I know, I know...if you hear "content is king" one more time in this space or Mark Ramsey's blog you're going to puke.  But the truth is, it's true.

This is why you have to advise morning shows to watch TV.  And talk about shows in clever, compelling ways the next morning.  I recently went at it with a bright, funny morning host who just doesn't like most of the television fare that's out there these days.  Whether you appreciate these shows or not, your audience does.  You can connect with them, and build material/bits/humor around these shows.