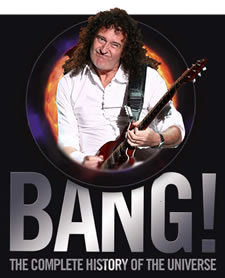 With apologies to Doug Podell, it is gratifying to see that Brian May will finally be awarded his doctorate in astrophysics - 30 years after he formed Queen.  We've all heard the cliché about radio or Rock N' Roll, "It's not rocket science."  Seeing that May's thesis is entitled, "Radial Velocities in the Zodiacal Dust Cloud," maybe we'll have to do some rethinking.

When in London a few weeks back, we saw the Queen show, "We Will Rock You," an entertaining couple of hours of Queen hits built around a flimsy story (something between "Footloose" and "The Matrix").  It's a reminder of Rock's staying power, and the truly theatrical nature of Queen's great music.

May's degree - and obvious intelligence - is also a reminder that there are lots of bright people who enjoy making, and listening, to Rock music.  Soon, Rock Radio will be rewarded for having many listeners who are smart and in the workplace.  The early indicators from PPM results show that gainful employment and solid incomes have an impact on ratings.  This is a good sign, and something that will be discussed at the Jacobs Media Summit next month, as Arbitron's John Snyder joins Greater Media Philadelphia's John Fullam, Charley Lake, and Paul Blake" in a groundbreaking "PPM Rocks" panel.

In the meantime, hats off to Brian May, and smart Rockers everywhere.  We've got a PPM unit waiting for you.