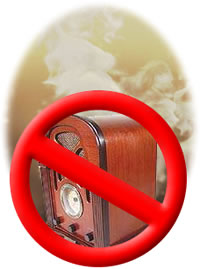 Many of you probably saw the story recently about how a new MediaVest report no longer groups "radio" as a discrete medium.  Instead, it's now a part of a larger category known as "audio."  Included under this new umbrella label are satellite radio, online radio, mobile content, iPods, mp3 players, and even television.

The good news for radio, according to the report, is that AM/FM radio still is a favorite audio-based medium for four in ten consumers, and that there continues to be wide gender appeal.  As TNS Media Intelligence President-CEO Steven Fredericks notes, traditional radio "remains one of the most used and highly valued media in the country."

But the new reality is their finding that "content is defined not by its old media name, but by its core property:  text, video, and audio.  All content, clarified and freed, can be distributed via any converged technology."

As a result, MediaVest's approach to audio planning is described as an industry movement that considers content over distribution outlet.  And that's something that is a tough pill for many radio veterans to get their heads around.  The fact that terrestrial radio is free, wireless, and everywhere is all well and good.  But if the content's not there, it just doesn't matter.

Isn't that a big part of the HD Radio story?  Its success won't depend on whether Radio Shack carries the radio, but whether its "stations between the stations" are compelling enough to drive interest and sales.

A couple of years back, Jon Stewart was asked about how consumers would access his show in the future.  His response:  "We make the doughnuts; we don't drive the truck."

Precisely.  All the more reason why terrestrial radio needs to start cranking out better donuts.

"Of those who were Very or Somewhat Interested in owning HD radio, 3% were very interested. However, with these respondents, we followed up with the question Would you buy an HD radio in the next two months? only 1.0% responded yes. Asked if they ever visited a retail store to look at or try an HD radio receiver, 30 members of our sample of 3179 said they had. That is less than 1%."

Interesting that Bridge finally broke their numbers down and reflected the grim-reality facing HD Radio - visits to the go-to site for HD Radio hardly registers compared to Satellite Radio:

Seems that broadcasting HD Radio over the broadcast bands is DOA, with comsumers not interested in purchasing expensive, problematic HD radios. Again, the abysmal HD channel content on clearchannelmusic.com/hdradio doesn't even compare to the "personalized" music services of Slacker.com, Pandora.com, and Last.FM. LOL !