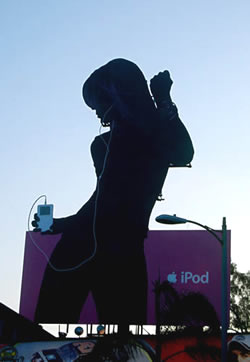 I was driving through San Francisco a few weeks ago, and couldn't help but notice the incessant iPod billboards all over their major freeways.  They were spectacularly large, and there were a lot of them.  It got me thinking - here's a product that is simply hotter than hot (as of April, over 100 million were sold), everybody knows about it, many people have bought more than one, and those who don't have one want one.

And yet, Apple continues to market them as if they're still new.

It took me back to one of those unpleasant moments when I visited a client station in the middle of a great spring book TV marketing campaign that appeared to be working.  I happened to be in the station on "trend day," and we popped a great April.  Everyone was feeling very optimistic.  I walked into the GM's office a few minutes later.  He was on the phone with the media buying service, canceling the last two weeks of the buy that was set to run in June.  When I asked what he was thinking, he explained that budgets were tight, it was looking like the spring book would be good, and that everyone had pretty much seen our campaign already, so let's save a little money based on that first good trend.

This is NOT how Steve Jobs thinks.  He knows he has the game changing device in the iPod - a media, technology, and pop culture icon.  Why NOT continue to promote it and market it?  The iPod is something to be proud of.  It's an incredible statement about Apple's success.  And there's room to grow because millions of people still don't own one, and new models are being released each year.

That's why it's hard to understand what radio is often thinking.  Yes, we're in the middle of a revolutionary change in our business, and there's a great deal of discomfort in the air.  But if you have that hot morning show, a great new format, the winning sports franchise, or a big contest, why wouldn't you want to let everyone in the market know about it?

In some ways, Mel Karmazin's genius may be at the root of radio's current philosophy about marketing.  His famous line - "Howard Stern is your marketing budget" - was a blunt statement about how Howard was a huge expense and his buzz would generate all the cume a station could ever want.  That way of thinking permeated radio throughout the '90s, and then consolidation sealed the deal.  When you own three Rock stations in town, why would you waste the money to market them?

Radio is a business that, on the one hand, tells its clients that advertising is necessary for brand building, awareness, and sales.  And on the other, often ignores those some tenets in marketing and advertising its own brands.  We are now competing with marketing / media / technology geniuses, whether it's Steve Jobs, the Google guys, Rupert Murdoch, or Bill Gates.  They're not bashful about singing their own products' praises.  And neither should we.

Terrestrial radio has some great stations, some incredible personalities, and other assets that shouldn't be buried, hidden, or taken for granted.  How many stations with the #1 morning show in town are actively singing the praises of their superstars?

With some great marketing, we could make radio bigger than life again.  Letting our customers - listeners and advertisers - know that we've got a hugely popular, buzz-worthy product isn't something we should shy away from.  We should be proudly promoting it, just like Steve Jobs does.