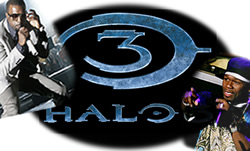 Kanye West and 50 Cent are the two biggest names in music right now and each had their new albums released on the same day Tuesday, September 11th.  Between the two of them, 1.6 million albums were sold in a week.

Linkin Park, arguably the biggest current rock band in the country, has sold a little over 1.6 million copies of their new CD which came out May 15th.

If you think that's overly optimistic, consider this:  Halo 2 sold 2.38 million on its first day.

Your male audience will be buying this game, talking about this game, and spending countless hours every day playing this game.  (Your female audience will be putting up with their male counterparts.)  As a listener, if your favorite rock station shows interest in one of your favorite past times, you’re going to listen.  Don’t let the opportunity of promotion with Halo 3 slip by.