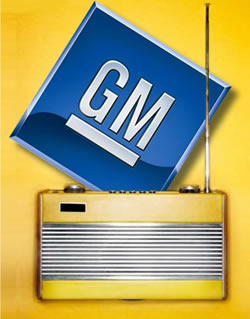 As I traveled around London and Paris a few weeks back, I couldn't help but notice the incredible number of European cars and trucks everywhere you look.  Of course, there are very few Fords or Buicks (none of the latter, not surprisingly).  But also sparse totals on Japanese cars, too.  Despite the huge numbers of Toyotas and Hondas in the U.S., you rarely see them here.

In London, it was mostly BMWs, Volkswagens, Audis, Jags, and Volvos.  In Paris, all of those, plus Citroën and Peugeots.  You really get a sense that Europeans support their own automakers and brands (even though some of them are actually owned by Ford).

Contrast that to the U.S. where Americans seem to avoid their own brands (except in Detroit).  Most people would do just about anything to NOT drive a Mustang or a Chrysler 300 or an Impala.  So the recent headline, "GM Lends Cars to Radio Hosts" caught my eye.  General Motors has chosen key radio personalities - Rush Limbaugh, Dr. Laura, Delilah, Glenn Beck, and even Ryan Seacrest (his Chevy Malibu should go over well in Santa Monica) - to drive and endorse their cars.

You can visualize how this will all play out.  American cars are certainly not as bad as many people think.  In fact, most of the hosts will probably be surprised about their quality (whether they are paid to say that or not).  Because they are major "influencers," their opinions will carry some weight with their audiences.  Overall, not a bad strategy.

But beyond selling Motor City metal, what does this campaign say about the power of radio and the influence of the medium's personalities?  They are the essence of what makes radio special.  They are the reason why consumers will stay with FM and AM stations, despite the competition provided by iPods and video games.  And they sell product.

If any of us were reincarnated as "clients," wouldn't we jump right into radio to sell our products?  WE know the power of radio's morning shows and daypart personalities, as well as their ability to move bodies and ring cash registers.  Plus, given radio's sales doldrums, you can bet that we'd be able to cut some very favorable deals along with our spot buys.  After all, radio is all about value added.

Radio needs to continue to focus on its "special sauce" - the DJs and personalities that matter - especially during these tough times.  Jettisoning members of the morning show or that afternoon drive jock who has asked for a 3% raise in favor of saving a few bucks this quarter is short-sighted and will contribute to the medium's mediocrity.  We saw this in spades during "The Bedroom Project" interviews, where most radio listeners mentioned personality before they mentioned music/formats.  (Dave Beasing will moderate the radio version of this research study at the Jacobs Media Summit 12 on Thursday, September 27th in Charlotte.)  GM is a believer, and perhaps this campaign will be rewarded with improved perceptions about their cars.  Brands like Buick and Cadillac have done well in J.D. Power quality ratings.  Meanwhile, Pontiac and Chevrolet continue to put out vehicles that are a good value for the money.  For GM, it's a matter of changing minds - and radio's top personalities can certainly do that.

If GM has figured out our value, when will we?