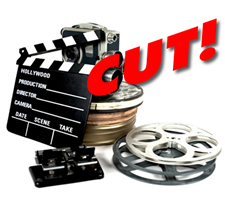 A work stoppage looms, one that will impact nearly everyone in the mainstream of contemporary American society.  No, it's not the UAW - they've struck a deal with GM, and are now well into finalizing discussions with Chrysler.  I'm referring to the Screenwriters Guild; the brethren of New York and Hollywood-based men and women who pen the scripts for TV and film.

These are the people behind the one-liners used by Jon Stewart and Jay Leno, the scripts for every prime-time sitcom and drama series, and all those big-screen productions in the pipeline (note: Reality shows like Survivor, Big Brother, and Dancing With The Stars are not bound by the existing screenwriters contract - I guess all those bachelorettes really are that witty).  That epic Paramount Studios re-make of Star Trek slated for 2009 release?  It looks like the Enterprise will sit in dry-dock if this dispute doesn't get settled soon.

So, what are the issues?  There is really just one, and it's another conspicuous case of an old business model trying to catch up with new media reality.  The writers want their share of digital residual royalty revenue generated from the sales of DVDs, their cut of on-line downloads, payment for free on-line streaming of TV shows from network websites, and even compensation for product placement in films (I guess someone gets paid to write - "Camera angle changes, music swells as we see James Bond call M on his Nokia N81 cell phone.")

If you write the script for a TV show, for example, Grey's Anatomy, you get paid when that episode airs, and paid again when it is shown as a repeat.  You then receive another check when that show becomes part of a full-season DVD boxed-set, and paid yet again when every writer's new-media-age-dream comes true - the show becomes available for download on iTunes.

Writing for TV or film is the gift that keeps on giving, but apparently not enough.  The last work-stoppage came in 1988 and lasted 5 months.  This was a time when no one had email, the internet was known only to upper academia and the military (and Al Gore), the consumer DVD player was still on the drawing board, and the idea of downloading video to a handheld device was the kind of fantasy pipe-dream found in, well... Star Trek.  A writer saw residual payments when his TV show went into re-runs, or her movie was released for VHS rental.  It's a bit more complex this time around.  The producers now contend that things are changing so fast, they don't even know how money is going to be made and what kind of numbers we'll be talking about.  So, Patric Verrone, president of Writers Guild West calls their bluff - "Our basic mantra is this - if they get paid, we get paid."

That was 19 years ago, and this issue has galvanized the writers' union.  The Guild contends that the old deal doesn't begin to account for the until recently unimaginable cash-generating schemes common to this on-demand, multi-platform, video iPod age.  Even the word "age" is outdated in this context, for all this will change, even before the "ink" is dry on a new deal between the writers and producers.

There's no new lesson here, just reinforcement of the conclusion central to the Jacobs Media / Arbitron "Bedroom Project" - it's all about C-V-C.  Consumers want, and the market will be driven by, Content - Variety - Choice.  These components are essential to any entertainment medium and delivery environment.  The writers may not have anticipated this in 1988, but they now want a new deal that maximizes the value of their content, as the variety of entertainment options competing for TV time and theater dollars widens, and consumers have an ever-growing degree of usage choice.  Just as these writers realize that it's no longer a small-screen/big-screen market, radio is coming to grips with the fact that it's no longer just an AM or FM or Walkman world.

Perhaps you need to negotiate a new deal with yourself, and make C-V-C a non-negotiable item.

P.S. How close are the two sides as the deadline looms?  Hint: the producers claim that this era of digital choice has cut into their bottom line, so get ready for more Desperate Housewives repeats, more amateur singing, more dancing with Jerry Springer, and bigger weight-loss contests in prime-time... or maybe you can just download that movie you missed at the theatre.  Or listen to the radio more.