JacoBlog - Jacobs Media's Blog: Are You Ready To Rumble?

Are You Ready To Rumble?

Jacobs' staffer, Eric Holmes, asked this question a few weeks ago:  "Could Rock use some rivalries?" 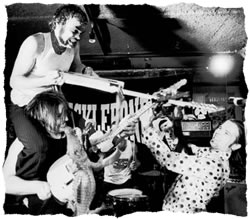 He ran across an article about the Hip Hop war that's been brewing between Kanye West and 50 Cent since the simultaneous release of their new albums.  With each rapper essentially challenging the other, both are coming out on top, in terms of sales, airplay, attention - and buzz.

There was a time when some of the same storylines occurred in the Rock arena.  There's been much written about how The Beatles and Stones were always cognizant of each other's album releases.  In fact, it's said that some of the Stones' early albums were eclipsed by the simultaneous debuts of Beatles LPs.  There was clearly a "war" between the two groups, and it probably led to even more sales over the years.

But that's the story of success in the entertainment world.  It's always been about conflict, us versus them, and who's winning the war.

That's the secret behind most Reality TV shows, all the way back to "The Real World" though "Survivor" and continuing with the competitive nature of "American Idol" and "Dancing With The Stars."  People like the concept of winning, a pecking order, and some friendly/not-so-friendly competition.

It worked for Stern and Mancow a decade ago.  In fact, it worked for Stern all the time, as he was always at war with someone - management, the FCC, minority groups, Imus, Opie & Anthony, his wife, etc.  Perhaps one of the reasons we just don't hear much from Howard these days is that he's run out of enemies.

In the Rock world, there's virtually no conflict or friction.  Who is challenging Linkin Park or Nickelback?  Guys like Clapton or Springsteen release albums and songs, but there's no controversy that fuels discussion and buzz.  If fans aren't debating music - who's biggest and best - the fun and energy just melt away.

In "The Bedroom Project," we saw strong evidence that the heated discussions are more about who's doing who on "Grey's Anatomy" and who's winning on "Idol" - not about what Billy Corgan said or what Chester Bennington's lyrics are all about.  At one time, music fans debated whether Keith Richards or Eric Clapton was the better guitarist.  But who are they talking about today?

It was just announced that the Stones' "Bigger Bang" tour grossed $500 million, far surpassing U2's "Vertigo."  And you know what?  Who cares?  It's old news because the Stones and other Classic Rock bands have been doing this for years.  Even Mick Jagger knows a tired story when he creates one.

Rock needs rivalries, Rock needs conflict, Rock needs emotion.  If it isn't coming from the artists and bands, then why should consumers get excited about the music and the musicians who perform it?  Somewhere out there, Rock's band managers and the singers, guitarists, and drummers need to craft a strategy, step out, and make some noise.  They're being drowned out by other genres and other media.