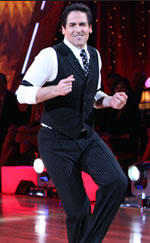 Everyone knows Mark Cuban, right?  He's the media maven who sold Broadcast.com to Yahoo! and forever became a media/entertainment icon.  Cuban is also the outspoken owner of the Dallas Mavericks, and is the most recent phenomenon on ABC-TV's hit show, "Dancing With The Stars."

But those are just items on his resume, because Mark Cuban is much more than just a list of accomplishments.  He is a well-marketed strategic brand.  Cuban "gets" branding, perhaps more than anyone else, and continually fine-tunes, builds, and hones his image.

As the owner of the Mavs, Cuban has become the best known mogul in the NBA.  He has brought Hi-Tech to the NBA, and actively returns fan emails.  Cuban has marketed his name as being especially responsive to his legions of Mavs loyalists.  Win or lose, this is a massively successful franchise that isn't afraid to try anything new.  And its owner is more famous than its best player.

Cuban, the brand, isn't afraid to take risks and shake it up with a little controversy.  His tirades against the refs resonate with NBA fans, and while Commish David Stern may find Cuban a pain to work with, the latter has elevated the buzz in the league.  When you're up against the NFL and Major League Baseball, you need all the headlines you can get.

Now, Cuban is taking his branding efforts to television.  It is noteworthy that Cuban isn't afraid to fail.  His "The Benefactor" series may have stiffed in '04, but he's right back on the horse with "Dancing."  And his spin this time is brilliant, melding the wild success and exposure of this ABC-TV hit show with his personal rehabilitation from hip-replacement surgery.  Not only is he competing hard on "Dancing," but he is becoming a mascot for surgery rehabbers everywhere.

And as always, Cuban is playing it brilliantly, casting himself as the underdog up against all the star athletes, movie idols, and "pretty boys."  Don't count him out to win the whole thing, but whether he pulls that off or not, he has already elevated his brand equity.

There's a great deal that DJs and personalities can learn from Cuban's brand-building endeavors.  A calculated risk, a little controversy, and some sound strategy can go a long way toward strengthening a brand.  And not being afraid to take a chance - and fail - is part of the formula, too.

Cuban realizes that as his own personal stock rises, all of his business "boats" rise, too.  The better known and loved he is as a person, the stronger the fan base grows for the Mavs and his other endeavors.  As icons like Donald Trump, Jeff Bezos, Bill Gates, and Warren Buffett well know, branding and marketing go well beyond P&L sheets.  In this world, the guy behind the company can shape its brand equity all the way to the bank.