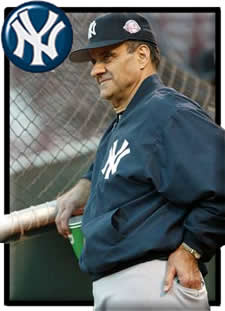 The drama surrounding the Joe Torre situation last week finally came to a head.  The Yankees - proving once again that legendary achievements don't necessarily translate into class - gave Torre a substandard offer (a reduction in pay, no less), and the manager did the right thing, and walked.  This ends an incredible era in Yankees history - and that's saying a lot given the team's accomplishments.  You can look up the Torre record of World Series appearances and victories, not to mention that he had the Yankees in the playoffs each of the twelve years he ran the team.

But perhaps his greatest accomplishment was his ability to manage - both up and down.  In George Steinbrenner, Torre had to deal with the most volatile of owners.  It rarely took much for George to cajole, intimidate, and shout at Torre, his players, and his coaches.

And throughout a 162 game season (plus exhibition and playoff games), managing all of those high-priced stars was an ongoing challenge.  From keeping A-Rod motivated and sane, to making sure Jeter knew he was still top dog, to dealing with Giambi's steroid controversy, to making all the other stars - from Posada to Matsui to Rivera - feel like they were just as important to the team's success - Torre demonstrated the ability to manage both up AND down.  And he did it under the glare of the predatory New York media, day in and day out.

Most radio programmers probably feel like Joe Torre much of the time (except for the multi-million dollar salary, of course).  On the one hand, it's the airstaff - frequently a high-powered morning show, and other needy staffers.  On the other, it's local management, and an increasingly demanding corporate team, headed up by a CEO who's under immense pressure.

Being able to relate to talent, make them feel good, and insulate them from the guys in the boardroom is a challenge.  And yet, having the ability to play the corporate game, deal with budgets, high-risk promotions, and still put an entertaining product on the air continues to be a tough putt in 2007.

The truly great ones are able to handle both management tasks deftly, serving as an advocate for both the bosses and talent, and doing it seamlessly and with class.  Last year at Summit 11, author Jeff Angus (Management by Baseball) put it together for us, providing examples of how inspirational field managers can tell us a great deal about how to do our jobs.

This week, the Yankees lost a great programmer... that is, manager.  And like the elite coaches in any field, Torre will indeed be back on another bench in a different town.