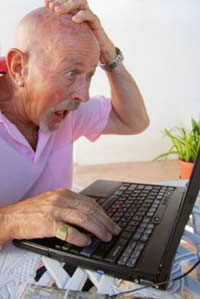 We continue to see it in Web poll after web poll, and focus group after focus group.  "Older" radio listeners - that is Boomers/Classic Rockers - are becoming more and more comfortable with new technology.  They may not be as mobile and fickle as their kids, but that's the beauty of it.  When they find websites and features they like, they stick around and display a quality that's usually in short supply on the Internet - loyalty.

A new wave of social networking websites is mushrooming, aimed directly at Internet users who are simply uncomfortable with MySpace.  And that gels with what we saw in our third annual Jacobs Media Tech Poll, conducted earlier this year.  In that study, nearly four in ten Classic Rockers indicated they participate at one level or another on a social networking site.  Classmates.com was a popular destination, because many Boomers have a desire to get in touch with actual "friends" - not virtual ones.

The New York Times reports that new "mature" social networking sites with names like Eons, Rezoom, Multiply, and Maya's Mom are all in business, and vying for membership in the massive Boomer community.  And their hope is that unlike kids who move from site to site with the herd, Boomers will join up and hang around.

This is yet another great opportunity for adult-targeted radio stations to better connect with their listeners.  Creating social networking opportunities for Classic Rockers, for example, is a slam dunk.  They may come from different walks of life, but their one common thread is their passion for the music.  And they love to talk about it.  Just conduct some Classic Rock focus groups, and watch the fun.  Even after the groups are over, and the respondents have been paid off, there's always a small group in the parking lot, continuing to debate whether Abbey Road or Sgt. Pepper's is the better Beatles album, or whether Keith Richards or Joe Perry is the superior axman.

Radio stations - and radio companies - that move their websites from just being flashy, one-dimensional billboards to truly interactive meeting places can benefit greatly in the next few years.  Boomers may have learned all about computers in the workplace, but many now regard the Internet as being integral parts of their lives.  As they share photos, concert stories, and life experiences with friends and family, radio can and should be a facilitator in making it happen.