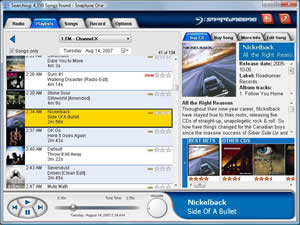 As more and more people see "The Bedroom Project" clips, the power of DVRs and TiVos becomes more tangible.  Add that to the fact that the penetration of these TV recording devices is in the 18% range, and thus having a major impact on television ratings.  More and more people store shows on these convenient hard drives, watching them later that evening or a few days later.  Of course, television execs and ad agency mavens are grappling with the economics of consumers watching shows at their convenience, and how these new viewing habits impact the traditional commercial architecture.

And after seeing "Bedroom," many people ask, "What about a TiVo for radio?"

But aside from assorted talk shows, and morning personalities, what's worth TiVo-ing on the radio?  What are we producing that consumers would want to record and listen to at another time?  That's a difficult question, but it needs to be asked.

And in related news, TiVo has now banded together with RealNetworks to offer Rhapsody to its consumers.  Thus, with access to 4,000,000 songs, TiVo owners can now mix, reorder, and program their own playlists and formats.  And music videos are on the way.

So what can a local radio station provide that sets it apart from the allure of new technologies like this?  How can a radio station create an experience that's more entertaining than someone's iPod or TiVo?  These are the questions we should be asking listeners in perceptual studies.  And they are questions we should be asking ourselves in strategy meetings.

"Which station is the concert station?" or "Which station plays too many bad songs mixed in with the good ones?" is no longer relevant to the larger issues that are facing broadcast radio.  And as WiMax makes its way into cars, and iPods and DVRs continue to proliferate, radio needs to reinvent itself yet again.

Our company has spent years and millions of dollars to build the best "TiVo for Radio" software - only to conclude it is not a business.

We've found a winner from organizing what makes radio special -- DJs, personalities, locations, and live! That makes it easier to find and use Radio alongside novel, if sterile computerized music services. Timeshifting and pause live radio are great features, but just features. But try it from http://radiotime.com/download