One of the key themes that emerged from the recent NAB and R&R Conventions - and the Jacobs Summit - was Arbitron's emerging PPM ratings service.  There was considerable interest in PPM among thousands of broadcasters, and the various panels were all well-attended.

The Jacobs Summit panel was especially directed toward PPM and Rock, and we were blessed to have Philadelphia mavens John Fullam, Paul Blake, and Charley Lake (representing management, sales, and programming), as well as Arbitron's outspoken John Snyder on stage.  This group did a great job of painting a PPM picture for Summit attendees who will have PPM in their markets, some sooner and some later.

Mark Ramsey's PPM panel the next day at the NAB was another eye-opener.  In one of Mark's major points about winning in PPM, he brought up a phenomenon he calls "Mic Flight" - respondents who tune out when a DJ starts talking.  In the diary system, there's been lots of forgiveness because no one's really filling out their listening in real time.  But in PPM, we're looking at minute-by-minute behavior.  And it's not pretty. 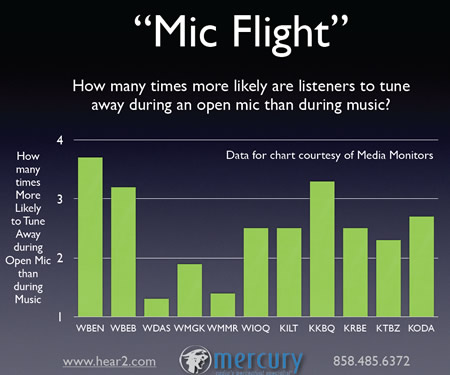 Clearly, some stations have an expectation for (good, hopefully) talk and content, and you can see them on this slide.  But others invite their audience to start punching around the moment a DJ cracks the mic.  Thus, many may conclude that winning in PPM is all about cold segues, less talk, and not making mistakes.

Several feel that Clear Channel may be taking that approach at a lot of their stations, where talk breaks are swift, dead segues are plentiful, and commercial interruptions are shorter.  By creating a seamless listening environment, PPM respondents are less likely to hear anything the least bit objectionable that may cause tune-out.

But contrast that philosophy with our findings from "The Bedroom Project," Jacobs Media and Arbitron's ethnographic study that was also presented at the NAB and Summit 12.  Our 17-28 year-old respondents generally were bored by FM music radio, and many were simply enjoying the control and variety from their iPods and mp3 files.

What motivated "Bedroomers" to listen to radio?  Personality, community, and the local touch.  And that means talk.  But if radio is to survive against new media and digital technology, doesn't it have to be more local, compelling, and engaging than an iPod or today's YouTube video?

So, which road to take?  Shut up, play the hits, and hopefully win in this week's PPM ratings?  Or build stationality, personality, and loyalty by opening it up, adding content, and yes... talking?  Are both paths necessarily at odds with one another?  Or is there a balance that needs to be struck so that compelling, personality oriented stations can continue to be created that will still win the PPM wars - while also competing in the new world of digital media?

Let's hope so.  Because if radio gets dumbed down and streamlined to generate a little more TSL in PPM, what will be the long-term impact of radio's sanitization on the larger world of media and entertainment?  We'd better think this one through.

You can view videos for both the "PPM Rocks" & "The Bedroom Project: Radio Uncovered" from Jacobs Summit 12 on our web site - www.jacobsmedia.com/summit

PPM is bringing to light a conundrum that has existed in radio for years...offense vs. defense, acquiring listeners vs. keeping listeners. Look, there are plenty of woes that we talk about in radio today and many can be traced to being timid about going on the offense. Of course, there's a time and a place for hanging back and protecting what is yours. There is also the time to hit the line and start acquiring turf.

In light of so much technology that provides choice and control, radio must take advantage of opportunities to grow it's audience not just protect it. When the mic is open, there is risk. But, there can also be reward.

You're right on the money in "striking a balance" but the bottom line is that your radio station has a much better chance of building a lasting audience if you program to them...not to the PPM.

Thanks for this mention, Fred!

I should note that, in that chart in WMMR's case, listeners are as likely to roll during music as during an open mic. WMMR is obviously doing something right, and it has to do with expectation and execution, not with "shutting up and playing the hits."

There's a lesson there.