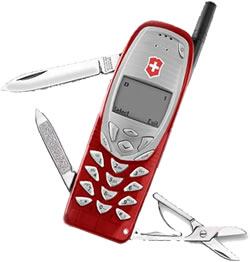 We used the graphic to the right for our "Bedroom Project" presentations in Charlotte - the perfect way to depict what mobile phones have become.  Consumers do quite a bit more than just talk to others on their phones - from texting to photo taking/sharing to the alarm clock to streaming.  And now, Nokia is acquiring the technology and expertise of Navteq to cement in the GPS function.  It won't be long before those portable, plug-in GPS units will become a thing of the past, as mobile phones make this feature as texting is today.

As Roger Entner, senior VP for communications at IAG Research chimes in, "It's a step that moves us toward the Swiss Army phone." And it's a reminder that media outlets absolutely have to be accessible via mobile phones.  That was one of the messages that was part of NAB President/CEO David Rehr's "Radio 2020" initiative.  Radio needs to be a part of new technologies, rather than run from them or pooh-pooh them as just fads.

This move by Nokia is another wake-up call for broadcast radio.  While there may be long-term value in introducing something totally new to the gadget world - that is, HD Radio - it is even more imperative that radio find its way into existing technologies.  In the case of mobile phones, these are gadgets that are far more than just phones.  They are lifelines, fashion statements, photo albums, texting devices, alarm clocks - and people don't leave home without them.

As radio loses its grip on portability to these devices and iPods, wouldn't it be wonderful if AM/FM stations could easily and conveniently be accessed by cell phones?