JacoBlog - Jacobs Media's Blog: No, NOT A Blender... 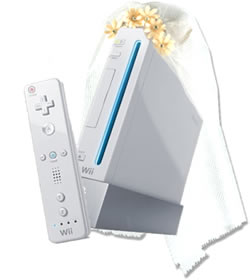 Jacobs Media's Dave Beasing gets his game on in today's post:

Quick quiz:  What brand name gift item has been in the top 3 on Amazon.com's wedding gift registry for the past several weeks?

Give up?  It's the Nintendo Wii videogame system.  Apparently videogames have evolved from a reason couples split up to become something that brings them together.

It's further confirmation of a key finding in the Arbitron/Jacobs Bedroom Project - that videogames are largely a social activity these days.  Many of the young people we visited at home were eager to show us how much fun they have playing videogames with their friends - either in person or in online competition - and they told us they often "talk smack" with their rivals.  One high school senior even said that he and his friends often refer to each other by their on-screen player names.  (I thought to myself, "At least teenagers get to pick their own nicknames now.  That's social progress.")

The Bedroom Project also verified what our friend Steve Schnur at EA Games has been telling us for years, that games are often a "gateway" to discovering other entertainment.  It's Steve's job to decide what sounds - and music - get put on popular games like Madden Football and NBA Live, causing many gamers to then search for more songs by those artists.  If not through James Bond videogames, how else would one of our Bedroomers - a senior at UCLA - have become a Henry Mancini fan?

Just as a whole generation has grown up loving the NFL because of Madden (the videogame, not the play-by-play analyst), Rock music is experiencing a revival that can be directly credited to Guitar Hero.  The third edition was just released with fanfare, and it's still not too late to celebrate.  Clients should check out our handy idea starters on JacobsMedia.com.

Technology changes, but common sense marketing doesn't.  Videogames like Guitar Hero bring people together, and - whenever that happens - there's a golden opportunity.