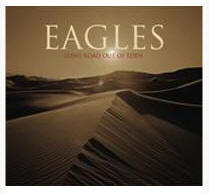 First, there's no record label to share the profits with.  (Of course, that also means no promo people, no radio tie-ins, and no contesting - all the trappings that seemingly drove airplay and ostensibly, sales.)

Second, there's only one retailer - Wal-Mart.  And given these monster sales, the nation's largest retailer is sharing its Nielsen Soundscan with Billboard, thus generating rank positions.

Third, there's been minimal airplay for the single in Rock, but tons of spins in Country radio.  It's interesting that less than 7% of the airplay to date (33,000+ spins for "How Long") has come from Rock/Classic Rock stations.  But a decent percentage of sales of Eden are probably attributable to factors beyond traditional radio airplay.  Irving Azoff, mastermind of this marketing effort, knows only too well the power of "Mt. Rushmore" artists.  The Eagles have a massive fan base, cultivated over the past three decades, and these consumers will trek to Wal-Mart, as well as pay $100+ for concert tickets when the band performs live.

Fourth, the band is moving away from those convenient format boxes that we in radio love so much (see #3). While some in the Rock community think the single/album is "too Country" (weren't "Take It Easy" and "Desperado" and all those '70s hits Country Rock songs in the first place?), it's noteworthy that the band could obviously care less about its prior images.  The Eagles performed at The Country Music Association's award show last week for the first time.

So, once again, the old models and "givens" are eroding.  Classic bands and classic brands don't need the traditional tools to expose and market their efforts.  They are finding new ways to reach fans that provide them with more control and more revenue.

Radio has to figure out these new realities, and build creative partnerships that play a major role in new releases, ticket sales and artist marketing.  If radio wants to get something from music, radio must also commit resources and talent.  The free lunches and swag days are long gone.  It's time to go to work.

I'll show you a great new example in tomorrow's blog.