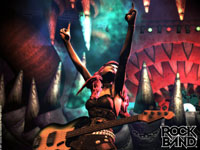 The video game buzz continues to intensify with the release of Guitar Hero III, and the great news if you're in Rock Radio is that it's all about you.  After all the "Rock Is Dead" articles you've had to explain away to your sales people and your jocks, the gaming industry continues to glorify the music gods that are the epicenter of your format.

But on November 20th, gaming gets a new entrant with the release of Rock Band, where players now control a guitar, mic, and drum kit.  And as an added bonus, the mic doubles as a cow bell, which should make fans everywhere very happy.  And the "set list" for Rock Band (at least the '70s and '80s material") pretty much reads like a meat and potatoes Classic Rock station (see below).  Additionally, the entire Who's Next and Metallica's One album will be downloadable, along with 18 Grateful Dead songs.

Aside from attractive giveaways, a fun activity at station events, and some great morning show bits (please consider a video cam for the studio), Rock Band is another reminder that the genre is - and always will be - fun, participatory, and cool.  Maybe it takes a push from a related industry to remind us how great it is to sit behind a bass drum or strum an electric guitar to some of Rock's biggest anthems.  This is yet another form of listener generated media, where anybody can be a star.

P.S.  And in a bizarre and often hilarious tie-in, the folks at Vh1 Classic have the "story" of "Rock Band Band," the Spinal Tap-like foursome who personify this new game.  These are great video segments, and add a lot to the flavor and buzz of "Rock Band."

My son just bought the XBOX 360 Rock Band drums online. I'm hoping he doesn't mash them up when he gets them....lol. He has a habit of getting a little too rough when things don't go his way.