In yesterday's blog, we talked about how the Eagles have circumvented Rock radio, record labels, and traditional avenues that used to be mandatory for music discovery, exposure, and sales.

Today, I want to show you an exciting new website that NPR recently launched - http://www.npr.org/nprmusic/

It's a cooperative venture between NPR, and some key Public Radio stations, including WXPN, WBGO, KEXP, KPLU, WGBH, KUT, JazzWorks, Minnesota Public Radio, and others.  The idea of the site is to give Public Radio listeners a chance to discover the music they hear on the network's programs, as well as on the air at the various stations involved in this initiative.

The site is rich - there are extensive music resources aimed at giving visitors a chance to sample music from a variety of genres, along with concerts, studio sessions, interviews, and music news.  It's a very cool site, and it's loaded with great content. 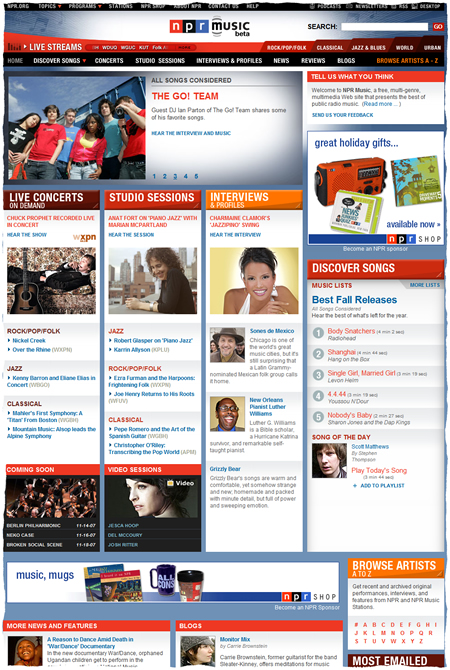 As we've discussed in this blog, radio is losing its vise grip on being the primary source of music discovery.  Between sites like iTunes and Rhapsody, video games, TV shows, and other outlets, consumers are finding myriad ways to learn about new music.

So where does this leave broadcast radio?  Well, one approach is to throw in the towel, concede the position to other media, and focus solely on personality, allowing its listeners to go elsewhere to find out about music.  Another is to take the more proactive role, as NPR has done, and provide the audience with a sense of control, variety, and choice. In fact, many DJs are still well-respected "guides" who listeners trust to help them decide what's worth listening to.

Where radio drops the ball is on its websites, sometimes virtually devoid of useful and entertaining music resources.  Consider the possibilities:  Classic Rock stations could do a great job of exposing its audience to new music from legendary artists, such as Springsteen and Dylan.  Alternative/Active stations could provide music information, social networking, and other tools that would help its more engaged listeners stay ahead of the pack musically.

These initiatives require time, personnel, expertise, and money.  But as Sumner Redstone reminded us all the other day at the Media & Money Conference, “Professionally produced content only increases in value as digital platforms multiply.”  And this: "We are now in a fragmented search economy, which means we need to extend our content beyond our own destination sites so consumers can reach it more easily... The content mountain has officially relocated."

Pretty sharp for an 84 year-old guy.

That's why this NPR music discovery site is so damn impressive.  They brought together different thinkers from different stations, formats, backgrounds, and geographies to achieve a common goal.  And they didn't just launch this site without a great deal of thought and effort.  They conducted research throughout this past year to ensure the site would be congruent with the tastes, expectations, and values of its audience.  (Full disclosure:  Jacobs Media conducted much of this research.)

It takes investment to have a bona fide place on the "content mountain."