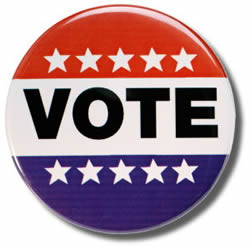 A recent blog entry about how Entercom's KNRK has worked out a cool consumer generated promotion with Toyota's Scion and Snow Patrol got me to thinking about the political race, and revenue potential in '08.

Radio is not in favor, as digital media are perceived to be cooler and more cutting edge, while television continues to rule the "old media" roost.  Yet, when you look at the crowded political landscape for the next 12 months, it makes you wonder whether radio isn't being overlooked by the majority of the political candidates.

If you're Hillary Clinton or Barack Obama on the left, or Mitt Romney or Rudy Guiliani on the right, you've got enough capital to run television without having to catch your financial breath.  But if you're John McCain, Joe Biden, Mike Huckabee, or Chris Dodd, you cannot compete with the millions that TV requires.  Yet, they all have messages to communicate, but insufficient funds to get the job done on the tube.

Enter radio.  The RAB and state broadcaster associations could easily start an initiative to pitch these second tier candidates on the most effective ways to dominate radio in key primaries.  We all know that a smart, saturation campaign across multiple radio stations can absolutely move the needle.  But campaign wisdom always points to television as the medium of choice.  That assumption needs to be effectively countered.

And then there's all the great morning shows in local markets, most of whom would be more than happy to spend a few minutes with candidates with something to say.  And it's radio's DJs who can allow these political hopefuls to be themselves, to have some fun on the air, and still manage to get their messages across.  Whether it's finding out their favorite artists, what's in their CD players, or whether they've sampled the local cuisine, radio personalities can do for the candidates what no other celebrities can do.

National business is cratering, and gone are the days when a great rating book automatically translates to great sales.  You don't see too many reps sitting around answering the phones, giving out rates, and sitting back waiting for the order.  But you also don't see enough of them hustling business, putting together creative packages, and seeking out opportunities for new and prospective advertisers.

Maybe it's time to get out the vote...for radio.

They only reason radio continues to do well is because almost every car has one and a majority of people listen to it when driving, especially when they're commuting to work.

I agree with the other comment, if it werent for my car, I would never listen to radio.