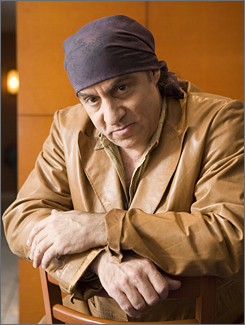 Leave it to Little Steven to take a major step designed to engage young people to appreciate Rock and its rich history and heritage.  While it's great that video games like Guitar Hero glorify the music, or that TV programs like CSI and half the commercials we see use Rock music as their soundtracks, our friend Steven Van Zandt has a new initiative that you should know about that takes Rock right to America's classrooms.

Steven's plan is to create a 40 chapter course (DVDs, CDs, web) for all of the U.S.'s middle and high schools - at no charge.  The idea is to teach about the roots of Rock, and the course actually has the blessing of The National Association for Music Education.  Working with Scholastic to make sure the course meets all the guidelines, Steven is in the process of enlisting rock journalists and players to participate.

It's interesting that in the midst of a youth crisis for both broadcast and Rock radio, the solutions could come from some unlikely sources - the video game industry through games like Guitar Hero and now Rock Band, as well as initiatives like this one from Steven.  As the struggle continues to keep young Americans interested in both radio and Rock, this is a venture that every Rock radio station should and could support.

As more and more young people in America begin to discover the roots of Rock and its rich heritage, it benefits all of us working inside and on the fringes of the music business.  Steven lives by the Lou Reed credo that his "life was saved by Rock n' Roll."  As he has done during the past several years, he continues to turn the tables and make an important contribution.