Lessons From The HD2 Highway 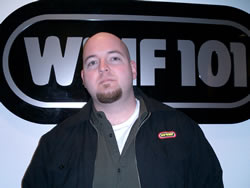 Note from Fred: Today's posting is a guest entry from RIFF2 Program Director Mark Pennington.  It's a veritable "6-pack" (Hey, we're in Detroit) of ideas about how radio can better approach the programming and strategic planning that ought to be a part of HD Radio.  We have been critical of the lack of content and imagination on the vast majority of HD2 stations in this blog.  Our belief is that few HD Radios will be sold until great content drives interest which will, in turn, drive sales.  Clever ad campaigns, better store placement, deals with automakers, and improved hardware are all well and good, but without great content, HD Radio won't work.  To date, the results speak for themselves.  With that in mind, think about Mark's great advice about how to do HD2 right, from the HD2 station recently honored by the NAB.

1. Pick your format wisely.  Make sure you have the right people to accomplish your objective.  If you work for an Oldies station, for example, you might not have the people or talent in the building to pull off an alternative station.

2. Experiment, experiment, experiment.  It’s a radio programmer’s dream - a station without format restrictions, ratings or revenue to worry about.  Take advantage while you can.  Try something new, if it doesn’t work, tweak it.  For example, we originally included Hip-Hop in the RIFF2 mix.  After listening and getting audience feedback, it didn't work, so we scaled it back.

3. Turn over some rocks when trying to find talent.  Just because that intern in the hall doesn’t have a deep broadcasting voice, doesn’t mean he can’t be good on the air.  People are becoming accustomed to hearing content created by non-broadcasters... podcasts, video blogs, etc.  It’s become more about the content then ever.  On our staff, we have Justin and Jeremy, two guys from the promotion department who love video games.  So we created a 2-hour video game around them, part of what makes RIFF2 special.

4. Tap into an internship program or local broadcasting school.  Find people who are hungry and passionate.  You will be pleasantly surprised if you take the time to work with them.  HD Radio has a chance to become the new “Farm System,” which is vital for the overall health of our industry…

5. Listen to your people.  Just because you have been doing this for a while, doesn’t mean you know everything.  Many of our ideas have come from the staff.  We get together and talk about promotional stuff, music, etc.  A prime example is the RIFF Music Awards campaign we are doing right now.  The idea grew from a discussion about how corporate and un-cool the other music awards have become around town.  Thousands of people have cast their votes for our awards on an HD2 station!

6. Have Fun! You have to have the right attitude and passion to make this work.  If you treat this like a burden or one more thing that you have to do without getting paid more, the results are predictable.  Have fun, be creative, enjoy the freedom, be a music fan again.  In that spirit, I have done a holiday dinner with just the RIFF2 staff every year.  We tend to forget how far a nice meal goes when you are a broke, starving broadcaster.  I did the same thing when we won the NAB award.  We made up plaques for everyone (costing us next to nothing), but you would think that we just gave them a Grammy Award.

Fred postscript:  When you read over Mark's ideas for building a great HD2 station, perhaps you thought this was pretty good advice for creating a successful HD1 station.  Indeed, it is.

If everyone thought and did the things that Mark and the team at Riff2 has done, HD Radio would gain significant consumer interest, receiver sales and eventually, loyal listenership.

This morning as CES opens in Las Vegas, it's NOT just about cool new devices and applications but CONTENT! Everyone agrees that it's great programming, local engagement and passion that will excite radio listeners. This is where YOU, like Mark, make all the difference.

And in case you are wondering about the progress we have made, just check out the following from CES this week -- and keep in mind that just two years ago, there were only two HD Radios made (both cost over $500) and the only place you could buy one was on-line. Today, with more than 50 different SKU's, prices as low as $99, thousands of retail outlets, automotive OEM implementation growing, and a new chipset that will make HD Radio portable, you should celebrate our progress. Then, we should get back to work and realize we still have a long, long way to go.

HD Radio products for home and car will be on display at the HD Radio booth including:

HD is already dead, 77% consumer awareness?? Where is that, on Mars? I personally do know know one person who has even heard of it, never mind anyone who own one outside of a small amount of radio people. HD or actually IBOC as it's more properly known jams adjacent channels and cut the range of radio to about 20-25 miles tops for FM radio with an expensive outside antenna like 50's TV. On AM it cuts great swaths of noise halfway across the country, killing both adjacent stations, even most of the pro-IBOC broadcasters dislike AM IBOC. Try to find one in your local Circuit City or Walmart etc., they are non-existent or hiding under a 42" TV covered with dust. Pocketradio above is right, that first post by Peter Ferrara is nothing but a pre-written commercial. Peter who is the head of the IBOC Alliance and who is nick named Bilk-O for obvious reasons is trying to jam up all existing radios made up to this point which is close to one billion, yes, 1,000,000,000 radios, which will go into the junk pile if this still born technology is somehow foisted upon the public. Don't fall for it!

Weren't these lessons published about a year or more ago? Why won't TeamBLOC stop?

If BigRadio 'talent' lacks an intuitive grasp of what to say, if they don't even know where the line is, never mind how to dance up to and along yet not cross it, if they can't grab and hold an audience, then how will more lessons help them?

How can HD jamming be unintentional? It serves BigRadio's greedy aims of jamming competitors off the air, and making listeners discard billions of radios worth trillions of dollars and replacing them with HD stooge sets.

HD was contrived by alleged experts. How could they design such a deeply flawed system, unless the intent was to jam?

As if in admission of this, a once vigilant FCC, during the corrupt 90s 'rewrote' the rules - just for HD.

What do HD boors say when you enjoy a ballgame on a distant station? "You have no business listening to out of town stations." Aren't they bold?

What next? They 'pay youse a visit', and smash your beloved 60's clock radio, new Bose system, and all else not HD? Lezz not gives dem no ideas, huh?

HD is an absurd, destructive, self-serving anachronism promoted with lies, denials, and coercion. Consumers reject it. Yet those who stupidly squandered millions on HD won't quit. They want the money.

Is that why we listen to radio? To 'get money' for greedy-gut BigRadio execs and their shadowy Wall Street backers who care not one whit about their audience?

BigRadio is demolishing itself. Listeners heard - and tuned out. BigRadio insists HD will bring them back. Big Radio proves that greed is its own undoing.