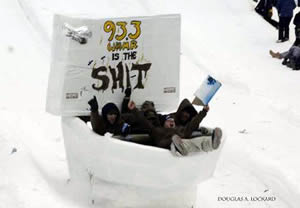 I recently attended a broadcast seminar where an interesting discussion broke out about the power of being local.  A respected researcher made the assertion that local radio is essentially a myth, propagated by traditionalists.  He posited that the value of local has eroded during the past decade, as the media/entertainment world has gone global.  Brands have become bigger than life, syndicated personalities have often overshadowed their in-market counterparts, and radio listeners are no longer all that interested in what's happening in their backyards.

Clearly, radio - as a reflection of one's persona - has taken several major steps backwards.  I remember three decades ago working for WRIF here in Detroit, where a true bumper sticker war was raging between our station and Doubleday's WLLZ.  We couldn't make our stickers fast enough, and the innovation to use the classic ABC racetrack logo shape to highlight big artists, sports teams, and other pop culture phenomena was a major part of WRIF's visibility strategy.  My brother Paul used to keep a legal pad in his car, tallying bumper sticker sightings.  We came to believe that the station's popularity at any given point in time was directly proportionate to how we were faring in the bumper sticker sweepstakes.

Today, you rarely, if ever, see radio station stickers.  Listeners no longer identify themselves by their station preferences on the backs of cars and trucks.  You might make the claim that consumers are simply less likely to display anything about themselves in 2008, but that would miss the bigger point.  What are stations doing to engender that same passion and loyalty in their listeners?  As radio programming has gone more national, what is being lost in the process?

And, are their still examples of stations who are indeed making a living by continuing to reflect the local vibe?

If you know anything about WMMR, you are already scoffing at that research guy's assertion about the diminishing value of being local.  Same with stations like DVE, 97Rock, KROQ, KISW, WRIF, X96, KQRS, and others that have made their livings by holding up that big mirror to their audience, and reflecting back the local vibe.

Recently, MMR presented their "Day Off At The Slopes" and "Cardboard Classic" events, and the results are happily displayed in the video.  MMR listeners feel a strong sense of connection to their favorite station, in this, its 40th anniversary year.  And "newer" stations are making similar connections, whether it's The Bone in San Francisco, FM94/9 in San Diego, or The Sound in Cincinnati.

Are there "economy of scale" benefits to launching a syndicated personality, and enjoying national ratings benefits?  To be sure, and that's exactly what Jack Benny and Arthur Godfrey had going in the '50s.  But it's that same thinking that has gotten radio in trouble during this past decade.  By combining, consolidating, and saving, many stations and broadcast companies have lost their unique essence.  And with it, that audience loyalty that can only come with truly touching listeners' lives.

There is the continued opportunity for the local story for radio to be every bit as dominant and valuable as it was in the past.   Don't let them tell you anything different.