This is one of my favorite times of the year.  Spring training is going strong, with the promise of Opening Day just around the corner.  After a winter like the one we've endured here in the Midwest, March is the transition month where good things lie ahead.

But it's also the time when a number of great radio stations pull out all the stops, and do their own unique versions of "March Madness."  Here are a few of the better ones: 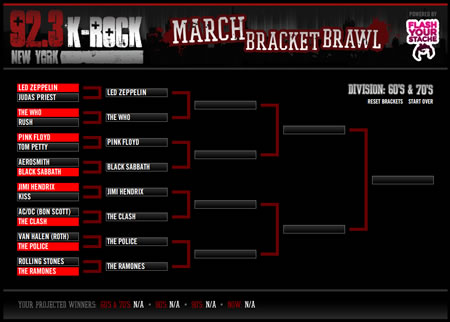 These promotions are great because they stir up passion - for music and other stuff.  Excuse me while I fill out my brackets.

I like these brackets! If you want to try something different, check out our "Garbage Madness", which is people and things that are pieces of garbage. The voting is crazy, and check out the sweet 16 matchups at y101Rocks.com!

Thanks, Sludge. I checked out your bracket (which is now in the Jacobs Media archives), and am looking forward to the matchup between Osama bin Laden and Oprah.