JacoBlog - Jacobs Media's Blog: The Merger - What, Me Worry?

The Merger - What, Me Worry? 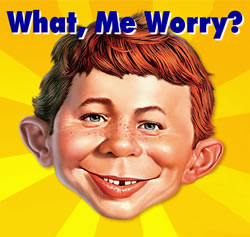 After more than a year, the DOJ has spoken, and the dreaded XM/Sirius merger is finally off to the FCC, where it will undoubtedly be approved - in some form.  For traditional broadcasters, this has been one of those gut-wrenching issues that has inspired much debate in boardrooms across the country.

But that's been the case with satellite radio from Day One.  In a style reminiscent of old radio war horses like Randy Michaels, satellite radio began calling out broadcast radio from the beginning.  Remember, "Beyond AM, Beyond FM...XM?"  Why wouldn't AM/FM operators get a little nuts when they saw these ads?

But today, while satellite radio is an irritant, it has been losing momentum for a couple years now.  We've seen evidence of this in our Tech Polls, conducted among 25,000+ rockers each year - just the kind of consumers that XM and Sirius have been targeting. In our newest poll, we're already seeing that when XM or Sirius ends up in the new car or truck you buy or lease, one's propensity to renew the service is much lower than average.  And overall, we're only seeing about a 56% absolute commitment to retain XM or Sirius among current subscribers - not exactly the numbers they want to see, merger or no.

While we won't know the new restrictions that satellite radio might have to follow once the merger is approved, we can only look at the DOJ's next to last paragraph for a clue about what the future may hold:

Any inference of a competitive concern was further limited by the fact that a number of technology platforms are under development that are likely to offer new or improved alternatives to satellite radio. Most notable is the expected introduction within several years of next-generation wireless networks capable of streaming Internet radio to mobile devices. While it is difficult to predict which of these alternatives will be successful and the precise timing of their availability as an attractive alternative, a significant number of consumers in the future are likely to consider one or more of these platforms as an attractive alternative to satellite radio. The likely evolution of technology played an important role in the Division’s assessment of competitive effects in the longer term because, for example, consumers are likely to have access to new alternatives, including mobile broadband Internet devices, by the time the current long-term contracts between the parties and car manufacturers expire.

And that's precisely what AM/FM operators ought to be thinking about, too.  If you want to worry about something, consider the day when most consumers have the Internet available in their cars.  Where will our stations be positioned in that tech smorgasbord when that day arrives?  If you're in denial about that eventuality or you've rationalized that it may be many years away, consider iPod/mp3 player penetration - right now.  Our same Tech Poll tells us that nearly six in ten respondents already own one, including nearly three-fourths of 18-34 year-olds.  What does that tell us about radio's continued ability to be the "go anywhere" medium?  And what does it also signal us about the incredible potential for creating and monetizing programming in the form of podcasts for these devices?

There's a future out there for AM/FM radio, and while satellite radio just got a second wind, the true forces that will most clearly impact traditional broadcasters are far more ominous.  But radio has the opportunity to play in the new media sandbox, if it focuses - once again - on creating great content, while providing multiple distribution outlets for that content.