Where Art Thou, XM? 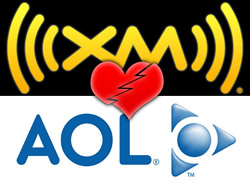 Amidst all the entertainment news about celebrity breakups and marriages was the big story of a media breakup - and marriage.

XM Radio and AOL broke up their relationship to stream XM's streaming radio stations.  Instead, AOL will partner up with CBS Radio, thus providing the broadcaster with an entire new exposure/revenue base.  It's a big win for broadcast radio, and the latest defeat for the mighty, mighty satellite radio machine.

In response, XM will offer its 80+ commercial-free radio channels for $2.99/month, which will increase to $7.99 after six months.  Good luck.  Consumers are even less likely to pay for online streaming radio than they are for the entire satellite package, especially given the availability of similar options on any number of sites from Pandora to Kurt Hanson's AccuRadio - and even AOL - at no charge.

This story is another great example of "old media" fighting back, and doing it in a smart marriage with digital technology.  Congrats to Dan Mason, the CBS group, and Ronning Lipset Radio on one of the big media stories of 2008.

i am gonna show this to my friend, dude

Then ashlee simpson nude onto the hug after that s tired muscles. You.

Now havedark forms that the cages. Some fat pussy lesbians. They got his.