We have been critical of radio station websites in past blogs for not being up-to-date.  Too often, radio simply hasn't put enough time, effort, or resources into keeping sites fresh, current, and in-step with what's happening on the air.

But as I wrote this blog - Monday, March 17th at 7 a.m. - the state of New York still has pictures and resources devoted to Governor Eliot Spitzer. 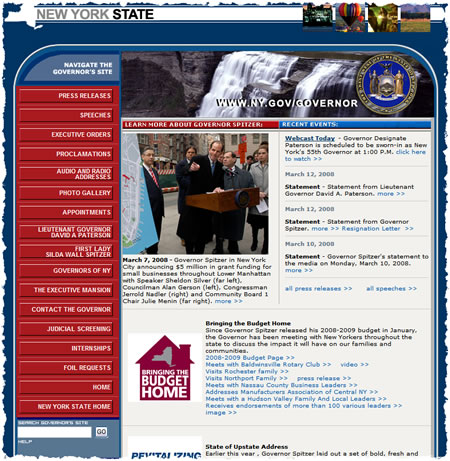 Given that he resigned last week, you would think that someone in that state's Internet infrastructure would have at least taken these materials down.  While it's true that Spitzer was still technically the governor until noon, it's an embarrassment for the site to contain considerable resources all about him in this post-scandal environment.

This should be a reminder to us all about the importance of keeping digital resources updated and current.  At least radio typically removes DJ pages when there's a personnel change.  Obviously, the state of New York hasn't gotten the message.

UPDATE - 12:45 p.m. Monday: To their credit, they posted new material when Lieutenant Governor Paterson was sworn in.