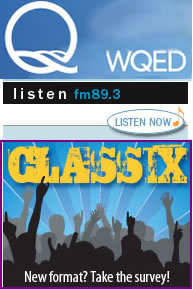 One of the dumbest and smartest things I've ever heard a public radio station do occurred this past Tuesday - April Fool's Day.  It was the brainchild of WQED/Pittsburgh's Executive Director, Susan Johnson.  Proving that public radio stations can smile, too, Susan's version of radio punk'd was to announce to her audience that WQED's Classical station would become a Classical/Classic Rock hybrid, in an effort to grow the audience and financial pledges.

To add to the joke was an online web survey where WQED listeners could give feedback about the proposed change (65% say that if this change goes into effect, they'll "never give another dime to WQED").

The highlight?  Consider this ridiculous exchange between Paul and host Jim Cunningham:

The Pittsburgh Post-Gazette ended up writing about WQED's misadventure into Classic Rock, providing the station with some well-deserved, tongue-in-cheek ink.

I'm sure there were many hilarious stunts that radio pulled off this April Fool's Day (hopefully, none of which triggered an FCC inquiry).  But WQED's efforts underscore what any station can do - with no budget - to make some noise, have some fun, garner some PR, and remind the audience how thankful they should be their Classical station will never play Jimi Hendrix again.