Inspired perhaps by Bob Rivers and the famous Orioles "stay on the air until they win" stunt in '88, Kevin Matthews (WLAV/Grand Rapids) spoke for all Michiganders this week when he personally took the Detroit Tigers' 0-7 start on his shoulders.  If you know baseball, the Tigers have been picked by many experts to get to the World Series this season, after picking up some big-name all-stars over the winter.  But their April collapse had the entire state of Michigan losing its collective sanity.

So, starting this past Tuesday morning after the Tigers had dropped their first six games at home to the Royals and White Sox, Kevin committed to stay on the air until the Tigers finally bagged a victory.  He survived a loss to the Red Sox that afternoon, and finally brought home the winner late Wednesday night.

Kevin's efforts were chronicled throughout by the Grand Rapids Press (front page story with picture), as well as extensive television coverage.

Kevin Matthews stays on the air until the Tigers win.

While mavens like the "Wizard of Ads" Roy Williams may make statements that local morning radio will be replaced by syndicated shows in a decade or so (or so he told Mark Ramsey), he obviously hasn't visited Grand Rapids lately.

These are the kinds of "reflective" bits and content that are truly emblematic of the community vibe, and Kev clearly got this one right.  By the way, the budget for this stunt?  $0.  Just hard work on Kev's part, dedication to his show, his station, and his audience.  And the value of his efforts media-wise?  What is front page coverage and continuous television worth to an FM station in the first month of the spring book?  And the value of this promotion in Kevin's "storyline" at LAV?  Yes, priceless. 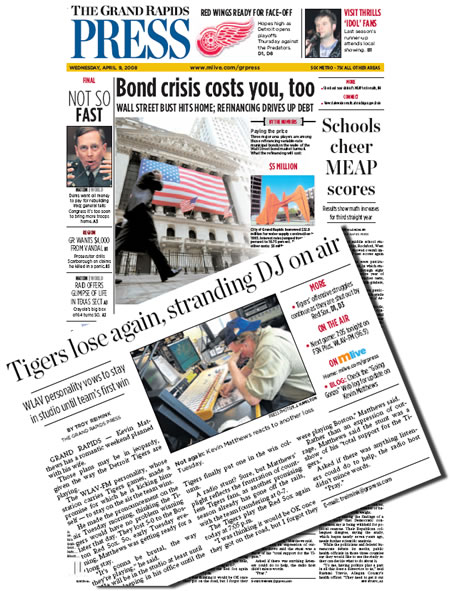 Any station, DJ, or morning show can do this.  But not many are.  It requires effort, commitment, and the energy and instinct to grab the moment and run with it.  And if the emphasis of our business ever re-focuses on programming content, radio can recapture its mojo.  Because you're not going to get this kind of radio from the syndicated show from Indianapolis down the dial, from your iPod, or from 200 commercial-free satellite radio channels.

But after seeing the the press on TV and print, you realize you CAN'T BUY the front page or a news clip. So yes, sometimes, "old hat" is all it takes.

Just being a live human being with the ability to do something is getting rare these days.

Happy to see anybody who has the ability to break format left on the air.

Bob, it was a beautiful thing. Management jumped on the idea, and supported Kevin all the way. Thanks for being an inspiration - 2 decades later. Hope all is well with you, and thanks for chiming in.