JacoBlog - Jacobs Media's Blog: Get Off The Pot

Get Off The Pot

Recently, we saw more negative data about HD Radio from various surveys that have been conducted in '08.  In pretty much every study, awareness is flat, sales aren't great, and overall consumer interest is limp.

Our Tech Poll IV data is no different.  We see year-to-year awareness and sales are up just a tick.  And that's after all those ads that ran on hundreds of radio stations, and continue to this day.  Up against iPods, cool cell phones, and other hot gadgetry, HD Radio isn't even an afterthought.  It's just not on radar screens.

The difference is that our survey actually asked about the barriers to purchasing HD Radio.  The good news is that they are clear.  The bad news is that they look a lot like last year's data.  There is still a lack of clarity about HD Radio, and what it's all about.  Then there's the issue of price.  But the roadblocks that worry me the most are that most consumers haven't even heard HD Radio and/or they don't know anyone who owns one. 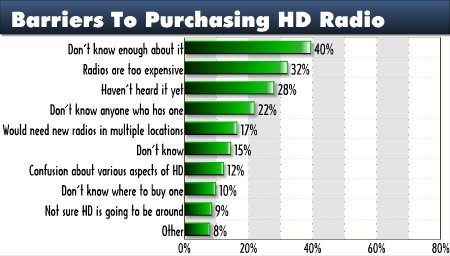 Clearly, this lack of buzz about the product has stopped HD Radio from making serious inroads.  You didn't buy that TiVo until you heard your friends telling you about how the box changed the way they watched TV.  You didn't make the plunge into the iPod world until you saw that guy on the plane with thousands of songs in a little device the size of a pack of cigarettes.  And you didn't throw down a couple thousand bucks for an HDTV until you walked into Best Buy that day and saw the Green Bay Packers like you've never seen them before.

It will take consumer buzz about HD Radio content to start motivating radio listeners to run to Circuit City or anywhere else to check out and price these radios.  This is why the recent announcement that WNEW-FM is back - on HD2 in New York City - is heartening.  This is the type of programming that just might generate some word-of-mouth among New Yorkers, anxious to go back and revisit that legendary station's archives and history.  Below are a couple of promos for the new WNEW-FM HD2 channel that are truly inspirational.  In New York, this is the type of programming that might actually move some radios off the shelves.

We need to give these radios away, set up kiosks in high-profile retail centers (called malls), and let people experience HD Radio in markets where there's actually something worth listening to on HD2 channels.  But sampling aside, consumers aren't going to get revved about HD Radio until there's unique, buzzworthy programming worth getting excited about.  If HD Radio is going to be part of the future of our business, it needs to become a bigger priority in the present.

"You didn't buy that TiVo until you heard your friends telling you about how the box changed the way they watched TV. You didn't make the plunge into the iPod world until you saw that guy on the plane with thousands of songs in a little device the size of a pack of cigarettes. And you didn't throw down a couple thousand bucks for an HDTV until you walked into Best Buy that day and saw the Green Bay Packers like you've never seen them before."

This is DEAD ON. Most radio stations right now are touting the "crystal clear" quality of HD. The audience doesn't care! These are the same people who have loaded up their iPods with average-sounding MP3s.

The DVR/TiVo is/was a must have. It's a life-changing invention. Watch any show any time in less time. Radio in HD does nothing for me. Give me some kick-ass unique programming on the .2 channel that I can't bear to miss. (Even this will be tough, since any kind of unique programming you could ever want is on the 'net.)

Your post was similar to one posted a while back by Mark Ramsey, about having to give away HD radios.

"We need to give these radios away, set up kiosks in high-profile retail centers (called malls), and let people experience HD Radio in markets where there's actually something worth listening to on HD2 channels."

I really don't know where to start. Mark Ramsey disagrees with you about the price of HD radios:

"Are you waiting in line for your HD radio?"

"If you lower the price enough, folks will buy the radio. That's the belief about HD radio that is being stoked in our industry. And, of course, it's wrong."

Since there is no perceived need for HD Radio, as it relates to analog AM/FM, there is no incentive to buy, no matter at any price. HD Radio has been around for five years, and now, there is still talk of giving away these empty radios? The HD signals can't penetrate retail structures, and with HD radios not selling, there is no incentive for retailers to bother with setting up external antennas. This isn't the 50s/60s, anymore. Many retailers don't even stock HD radios, anymore, since there is zero demand - look what happened to the Accurian HD at Radio Shack. It is very evident thatHD radioswill never sell.

Bravos, Fred. Good post. The future of HD Radio is in the hands of the operators. I agree with you HD Radio needs to be product driven, listener focused, "The play's the thing." CBS' WNEW initiative is indeed a step in the right direction.

While Mr Smith has a right to his own opinion he does not have a right to his own facts. HD Radio, IBOC, has been around longer than five years and there's no evidence whatsoever to suggest HD Radio receivers will never sell. Mr Smith sounds like one of those AM radio guys from the 1970s "FM will never take off."

Radio's migration to digital is a process not an event. It's early in that process.

I'm curious. Has CBS hired a staff to keep the nostalgia fresh? Or is it just a tape editor to rearrange the past?

The "real" WNEW-FM has adopted Rick Sklar's comment about the old WPIX-FM - "Format du Jour." I was one of WPIX's gaggle of program Directors.

WCBS-FM might be a good example. On HD-2 they stripped out the legendary personalities and became sterile. If there's really an audience for the old WNEW format, why not put it where it belongs - on the real channel?

Until companies begin to treat their secondary channels as real radio stations it'll die the death of 4 channel radio. Even AM Stereo has millions more receivers in operation than this system.

Remember that the satellite services had 100+ channels in operation before the first receivers were sold. In my market, there are no retailers set up to demonstrate these expensive receivers.

The use of distressed radio inventory as the sole promotion campaign violates Advertising 101 - use a mix of media. I wonder how many major market stations pushed aside a very expensive spot in morning drive to run a promo that disparages the cash cow.

Demos of HD radio at malls would be a good idea if you could actually receive HD Radio signals in a mall. I’ve tried to listen to HD radio at five different locations and have come up empty at each one. Radio’s future is not in HD radio.

Although it may be too late for the music industry, it isn’t too late for radio. But time and resources spent on HD Radio and other dead ends (“Radio Heard Here”) represent the squandering of valuable time while the clock is ticking.

Personal attacks aside, the first HD Radio was sold four years ago, and I believe that stations started broadcasting in HD in 2002 - you sure got me on that one! Let's see - 500,000 iPhones were sold the first weekend, after being introduced. On Radio-Info's HD Board, it was reported that only 130,000 HD radios have been sold, not the 330,000 as reported by iBiquity. With poor coverage and bland programming, no doubt, a number of those have been returned:

"According to a press release from the Alliance 330,000 HD receivers were sold last year. This is a 725 per cent increase from the 40,000 sets purchased a year earlier and therefore 2007 was a 'breakthrough year' for the technology. In 2008 they will sell a million of the things."

This isn't the 50s/60s, where consumers were comfortable fiddling with and mounting rooftop antennas. You can't compare today's media landscape, with that of the 1960's - just ask Mark Ramsey! Now, we have iPods, the Internet, call phones, Satrad, Pandora, Slacker, and Last.fm (personalized music services).

At least this is the first commercial station that I've seen excited about programming HD channels. Everybody else seems to treat the HD more like when they last had to kiss their aunt on the mouth.

Non-commercial stations have been excited about HD, but the actual cost has muted the public service enthusiasm.

Ugh. I started thinking about some of my aunts and it's not pretty. Thanks for the comments, Anthony, and for all who weighed in on this blog.