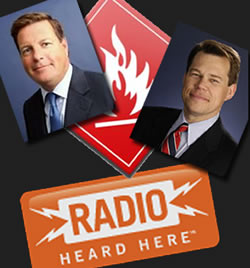 No, it's not a morning show in Atlanta on an Active Rock station, nor is it the new talk show in Cleveland.

But radio's newest team, Rehr & Haley, may be the medium's best bet for a reimagined future.

At the recent NAB Convention, CEO David Rehr and RAB leader Jeff Haley worked together to deliver a positive message to the industry.  The "Radio Heard Here" campaign is an effort to remind America (and its advertisers) that our medium is a valuable and ubiquitous form of entertainment.  Rehr noted that "The sleeping giant has awakened," while Haley referred to "a renaissance in radio with respect to programming."

While the more cynical will look at this campaign as a lot of hot air, the fact is that radio needs champions and cheerleaders like Haley and Rehr.  For too long, there's been no one in a position of authority that has stepped out in a major, visible way to defend, promote, and champion this medium.

It is too common these days for conversations among radio people to quickly deteriorate into industry bashing.  I've been guilty of this, too, because it often seems like the pressure on radio is immense, the competition daunting, and the reactions just too slow to make any difference.  We need to turn the conversation around.

And there's no better place for a new initiative than at the top of radio's most prominent associations.  We are seeing indicators as well as that some broadcasters are stepping up, facilitating more creative output, and welcoming new ideas.

Our W.T.D.A. campaign - designed to integrate our traditional medium with digital products and features - takes Seth Godin's new Meatball Sundae to heart.  Radio needs to marry its big cumes and wide reach with the technology that has captivated the country.  It can be done, but it will require that radio ownership supports Rehr and Haley's initiatives, and invests in radio's future.

Dave Beasing recently sent me a book by Dan Pink called A Whole New Mind:  Why Right-Brainers Will Rule the Future.  Its premise, according to Pink, is simple: "The future belongs to a different kind of person.  Designers, inventors, teachers, storytellers — creative and empathetic right-brain thinkers whose abilities mark the fault line between who gets ahead and who doesn't."

The Age of Consolidation is ending.  Radio needs to get back to its creative foundation.  Rock on, David and Jeff.  If there was ever a time for a positive outlook and some creative proactivity, it is right now.