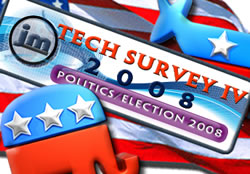 Jacobs Media's Tech Poll IV highlights are now available on our website.  While we asked our usual techie questions in this fourth annual poll about everything from text messaging to iPods to satellite radio, we also included a section about the upcoming Presidential election.

While we have no trending data from past elections, we were astonished to find out that 84% of respondents - and we're talking about more than 27,000 interviews from 69 Rock radio station databases - say they're planning on voting this fall.  That's an incredible number, and it echoes the exit polls and primary turnouts that America has witnessed in '08.  By the way, this strong projected turnout runs across age, gender, and format groupings.

We also held our own "mock election" inside the poll, simply listing out the candidates (no matchups), and asking for each respondent's top choice.

Barack Obama comes out on top among our "likely voters" with 26%, followed by McCain (22%), and Hillary Clinton (18%).  The poll was taken in late Feb/early March, so some of the developments that have occurred since (Reverend Wright, Hillary's Bosnia gunfire gaffe, etc.) aren't factored in. 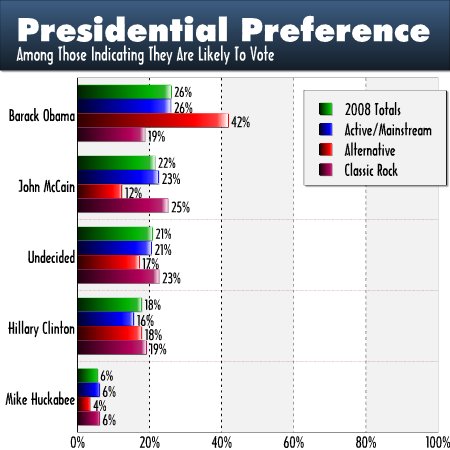 So what does this mean to radio and its personalities?  Many morning shows have been taught to avoid "talking politics" because it can be polarizing.

And done the wrong way, this can be the case.  But when 80+% of the audience is engaged by the election and plans on casting a ballot, personalities and shows need to find a way to address this event on-the-air, reflecting the local market vibe.

Jacobs Media clients who purchased their local market breakouts have an edge, because they can see party preferences in the poll, as well as the candidates of choice among their station's participants.  But even if you didn't take part in our survey, this is the type of information that is readily available by conducting a brief poll on your own among members of your database.  In this way, you can help guide your personalities with information that is relevant and market-specific.

This also should translate to a station's web presence, too.  The Sound (WSWD/Cincinnati) has a great election page, complete with useful links that direct its audience about how to register to vote, as well as information from the various parties, the electoral map, and other resources.  It reflects their audience's interest in the election, and The Sound's essence. 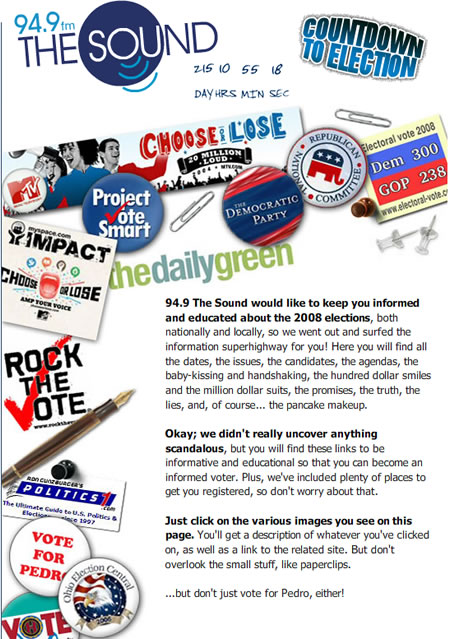 Once again, email databases are a critical - and often underused - connection to the audience, how they think, and what they want.  There's more to these clubs than just sending email blasts about upcoming bar nights.  They are a truly valuable resource that enough stations effectively tap.

In the coming weeks, we'll have more specific breakouts and results from Tech Poll IV.  In the meantime, with just over 200 days before the Presidential election, it's going to be an exciting summer and early fall in America.

Thanks to Campbell Brown on CNN for covering this story last night. Amazing how many bloggers have picked up on the angle that Classic Rockers backing McCain (and not by a large margin), while often ignoring Alternative & youth for Obama (more overwhelmingly) AND the bigger story (or so we thought) that 84% of all Rockers plan to vote in this election.