Our Tech Poll has provided us with some fascinating insights about the satellite radio threat during the past four surveys, and this new report is no different. As reported in yesteday's New York Times "Drilling Down" feature, XM and Sirius have some challenges retaining subscribers.

In the past, we've been able to track satellite radio growth among Rock radio listeners, as well as Howard Stern's impact on Sirius.  Last year, we noted that XM and Sirius growth had stalled out.

This year's survey provides us with some great data.  Here are some headlines:

1. The merger doesn't appear to be of great interest to non-subscribers.  For the vast majority, there is indifference or a lack of information about the coming together of XM and Sirius.

2. Overall growth is up - from 12-13%, but interest in satellite radio among non-subscribers is at its lowest point since the first survey in '05.

3. As has been the case in past polls, satisfaction with Sirius is stronger than for XM.  This could be due, in part, to Howard Stern who is obviously a big reason why our Rockers opted for Sirius in the first place.

But the big takeaway from this new '08 study comes from a question we've never asked before - how subscribers became subscribers.  It turns out that while about four in ten made the choice themselves, about one-third tell us it came with the vehicle they bought or leased, while one-fifth received satellite radio as a gift. 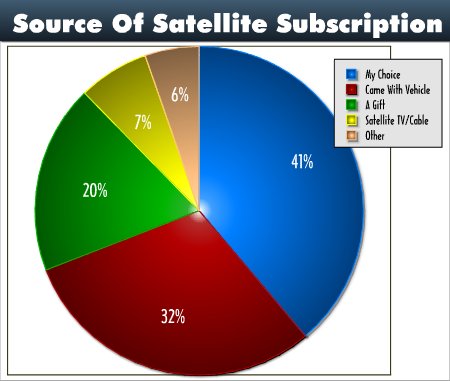 And here's the rub - if you made the choice yourself, the odds are good you'll continue the subscription.  But if it was pre-installed in your car or truck, or it was a gift, chances are better than you're not as enamored with satellite radio. 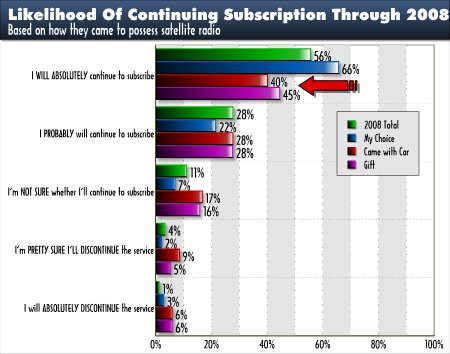 The implications of this are important because it suggests that not all satellite radio subscribers are created equal.  And with half being introduced to XM or Sirius because it came with a car or it was a gift, these consumers are considerably shakier.

This "churn" with satellite radio continues to put pressure on a business model that has already had difficulty turning a consistent profit.  And it speaks to the ongoing challenge of keeping subscriptions plumped up, in the face of some obvious attrition.

Commercial radio has some challenges, to be sure.  But the subscription model is a tough putt, made all the more difficult by the plethora of new - and old - entertainment choices.  While many traditional broadcasters have long been concerned about the growth of satellite radio, this data suggest that our challenges are clearly coming from other sources - notably, iPods, cell phones, and the Internet.  Of course, these areas spell opportunity for broadcasters, and we'll continue to cover these topics in upcoming blogs.