From The Email Bag

Since the release of our W.T.D.A. initiative last month, we've had some great comment responses to the concept from clients, pundits, and even a broadcaster in India.  Recently, we heard from Bob Bellin, a guy who has managed radio stations and also been involved in digital ventures.

Here's Bob's "take" on W.T.D.A. and how radio needs to approach the digital challenge/opportunity:

I couldn’t agree more about digital applications – radio needs to meet its customers where they live, work and play digitally.  The world is moving toward customized, portable stratified entertainment (all digital) yet radio often seems clueless about the details.  And that’s really going to hurt any attempt to implement the W.T.D.A. strategy.

The problem is that when the uninformed try to “get digital” their digital applications to often miss the mark.  Start with the typical radio station website, which is often nothing more than a crude station brochure combined with some photos of local servers in tank tops and bikinis.  I haven’t been on the inside in awhile, but I can almost hear the sounds of station management whining about how sales “can’t sell the website.”  If there isn’t much value, there isn’t much traffic and if there isn’t much traffic, why would there be advertiser interest? 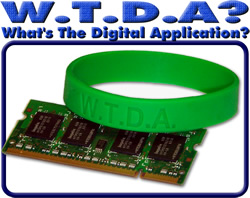 If radio really wants to play ball in this arena, it needs to:

1) Hire people who really understand how the digitally-initiated use those products.  Restrictive, half-baked proprietary versions of what is already out there will not create any groundswell.

3) Be willing to trade off some terrestrial listenership for these digital apps.  More digital entertainment choices will slowly siphon off terrestrial radio’s audience no matter what they do – why not walk those people into another house that radio owns – (albeit a new house) rather than let other companies do it?

4) Recognize that building a digital application is as difficult and complex as building a new radio station – and that its ability to generate revenue is tied to eyes and/or ears delivered, just like terrestrial media.  Radio hasn’t learned that lesson and until they do as an industry, failure is, well, an option.  HD Radio proves my point.

5) Ask their biggest clients… and some advertisers that are big, but not radio clients, how integration of terrestrial and digital assets could work best to help them meet their marketing challenges - and build some of the key answers into the applications.

The dialogue continues, so please post any and all comments you have.  And thanks to Bob for his thoughts.