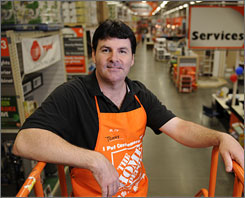 If you're looking for great examples of social networking and consumer-generated content, look no further than Boston's upcoming album and tour.  When lead singer Brad Delp died last year, the band was hard-pressed to find a replacement with his vocal range and intimate knowledge of Boston songs.

That's because he's never been in a band, never had any groupies, never worn spandex, nor has he ever demanded that the brown M&Ms be removed.

Most days, DeCarlo wears an orange apron over at the Home Depot directing shoppers to aisle 3 to find PVC piping.

But now, he's set to replace Delp on Boston's summer's concert tour, and on the band's next album.  How did he break through?  MySpace and consumer-generated content.  He posted cover versions of Boston songs on his MySpace page, and was "discovered" by another visitor to the world's social networking site.

Boston's Tom Scholz's wife heard the tracks, and DeCarlo is now a working member of the band.  Now that's a great result of social networking on the job.

Merry Christmas! I wish you a lot of gifts and luck in the new year.

With the new 2011. Year! Congratulations.