"Online Is The New Primetime"

Today's posting title is a quote from Gian Fulgoni, chairman of comScore, and it cleverly sums up how the Internet now exceeds television during the daytime hours.  In fact, a recent New York Times article actually asked the question, "What is primetime?"  That's because 6,000,000 May sweeps viewers have disappeared since last year.

The culprit?  The Control-Variety-Choice architecture of TiVos/DVRs and the Internet, especially due to the growth of network television sites that offer shows like The Office and Lost whenever you want to see it.

We saw this in our Tech Poll IV in a new question that revealed that four of every ten Rockers now have a TiVo or DVR.  The implications of this are obvious if you're in the TV business.  But what if you're in radio? 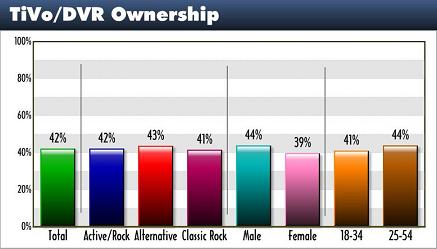 At what point will "morning drive" not hold its traditional lead over all other dayparts (aside from PPM)?  When will radio have a podcasting model that makes it convenient for fans of morning shows to be able to easily time-shift their listening?  (And keep in mind that if a PPM respondent listens to a podcast within 7 days of its original airdate, it "counts" in the ratings.)

Last week, we blogged about Hulu, and how radio has some of the same time-shifting potential.  As we noted, NPR understands the model only too well.  They average 12 million downloads a month and that's more than 200 million total downloads since they started their podcast program in August 2005.  And of course, that doesn't cover other public broadcasting networks and producers, or the many local public stations that provide podcasts of their content.  The graphic below shows the most downloaded podcasts on iTunes.  Look how public radio dominates: 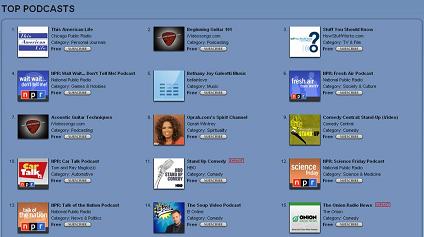 And the sponsorship dollars keep rolling in.  Another finding from the Tech Poll is that two-thirds of those who have downloaded a podcast are very or somewhat willing to sit through a commercial as the price of admission.

Maybe instead of calling it time-shifting, we ought to start thinking of it as "dollar-shifting."