In radio meetings, we're often talking about how we're going to have to reinvent events, features, and personality shows that have been around for years or even decades.  The last thing you can do is rest on those laurels in a rapidly changing environment.

But what about having to reinvent a hot product that's only been around for a year?

That's what Apple is doing with the iPhone.  After a very nice first year (our Tech Poll shows that sales are at a very nice 3%), there are signs of a slowdown.  Very few of those who don't own an iPhone indicate they're likely to take the plunge in '08.  After all that hype, that has to be a real comedown for Apple. 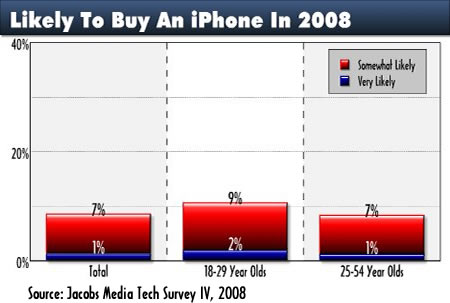 And it doesn't bode well for a product that has an iPod pedigree and similar aspirations.  So that's why Apple is taking mega-steps to reinvent the iPhone to make it more compatible for the business world, as well as for the larger audience.  From a faster speed to opening the device up to corporate and business types, the iPhone will be a different device.

But, of course, the big deal is that while the iPhone started as a closed system with no way to acquire new programs and applications, it is now open to program developers.  And there are more rumors that the case and look will change, that GPS support will be built in, and all sorts of other ideas (read: more hype) are on the way that can help get the iPhone to that next level.

Apple is a brand that doesn't live on its successes.  It is always looking for new ways to reinvent and reimagine its devices and applications.  That's what it takes to win in 2008.